It’s certainly been an eventful year, but yet again it feels like it’s all come and gone in no time at all! 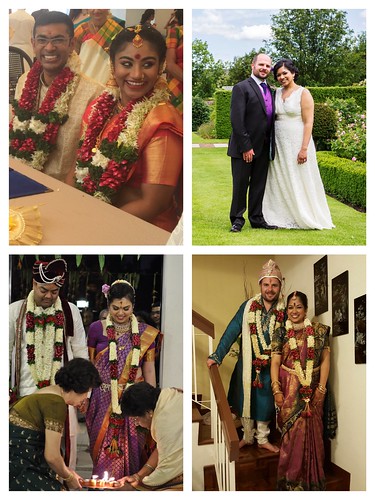 Our friends made us some new friends this year – Marla came along first, followed by Ella, and Alec, all of whom were lovely little guests at our weddings. It was a bit of a knitting drought this year, but I turned out dresses for both the girls, and booties for Alec (Ella’s dress in this photo isn’t joined up yet – remarkably I didn’t take any photos of the finished item!). 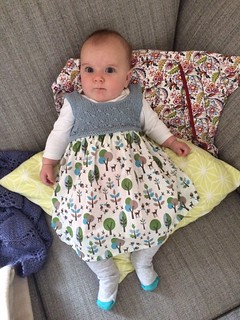 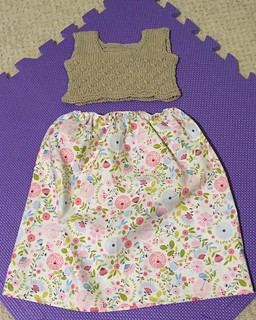 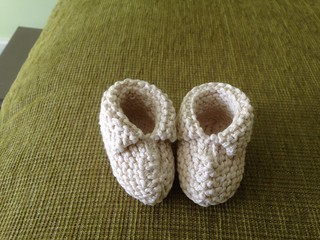 In the first half of the year new babies arrived, and in the second half of the year new ones were announced, so it looks like 2016 will be the year of babies too! Most excitingly of all, my brother and sister-in-law will be having a little one, so if we thought it was going to be quiet for our family after this year, well, it’s not 🙂

In other knitting/crochet news, over 2014 and ’15 I made up a pile of little hearts which we used as part of our wedding decor in Aberdeen. 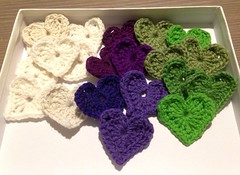 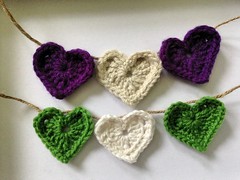 In the world of feminism, this was another great year, and I truly hope the trend keeps on going. Celebrities used their fame and their awards speeches to raise important questions and declare feminist messages; there were improvements in the coverage of women’s sport (and the England Women’s Football team did splendidly at the World Cup!); girls shouted out for more representation of women in education (female thinkers in A-Levels politics; female composers in A-Levels Music); more women in parliament after this year’s elections, and a whole new political party was formed to push forward the agenda for gender equality, of which I get to call myself a founding member.

Finally, a political party I've actually been inspired to join! So proud to be a card carrying member of @WEP_UK pic.twitter.com/QQGmTaL7UN

We’re nowhere near where we need to be, of course; there was plenty of sexism and misogyny still happening in 2015, in case anyone needs a reminder, but what’s great is just how much these issues are being talked about publicly, and increasingly so. Here are some brilliant feminist moments from this year, and I look forward to more in 2016!

Many amazing things have happened around the world and here in the UK over the past year, and many difficult and downright awful things happened as well – I’m aware that I’m so very lucky not to have been directly affected by these events, and wish strength and peace to those who were.

As for my world in 2016, there’s plenty to look forward to – our honeymoon; a nephew or niece (woo!); doing up our garden, which has been a little neglected this year; watching a school of baby fishies grow (they’ve just hatched); hopefully making it to a new knitting festival in Inverness; and I aim to do a whole lot more reading, knitting, crafting, and blogging with all this non-wedding time I’m going to have 🙂

Here’s to the New Year, and wonderful wishes to you all! What are your plans for 2016?