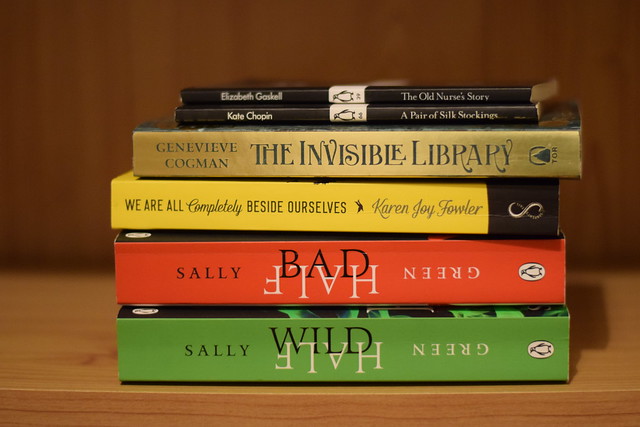 In keeping with last year’s literary theme, I’m celebrating female writers today.
The past year was pretty packed for me so reading time suffered, but here are some books by women that I’ve very much enjoyed.

We are All Completely Beside Ourselves – Karen Joy Fowler
It’s hard to describe this story without giving away too much, but it delves into family relationships, communication, society, finding your identity – told from the point of view of a girl growing up with psychologist parents. A pick from my book club.

Half Bad and Half Wild – Sally Green
Young adult fantasy, dealing with segregation, societal expectations, and coming of age amongst witches. Classic witchy, magicky stuff in a very contemporary setting (they carry mobile phones, use the internet, and deal with local authority bureaucracy). Really quite gripping reads, and the final book of the trilogy, Half Lost, is out later this month.

The Invisible Library – Genevieve Cogman
Librarian spies from a mysterious Library hunt down books from alternate worlds, and here they investigate goings on in a steampunk London. A good, fun read.

I plan to slowly work my way through Penguin’s Little Black Classics, and my reads so far include:
A Pair of Silk Stockings – Kate Chopin, and
The Old Nurse’s Story – Elizabeth Gaskell
Kate Chopin’s tales are gritty and hauntingly sad, while Elizabeth Gaskell’s two stories are gothic chillers – very much unlike her more familiar stories, but just as intriguing.

As expected, my “to read” list is one I could keep adding to forever, so I shall just share my Pinterest board for books instead, which I think is quite female heavy.

Finally, here’s something to look out for today:
The Bailey’s Women’s Prize for fiction longlist will be announced, followed by the shortlist in April, and the winner in June.