A couple of months after getting married in Aberdeen we had a Hindu wedding ceremony in Kuala Lumpur. This is the sort of thing I’ve grown up with, so I was thrilled that Gareth and his parents were on board for this and my parents were up for organising it.

As Hindu weddings go there were several events involved, and ours were fairly typical for Hindus of Sri Lankan Tamil ethnicity. 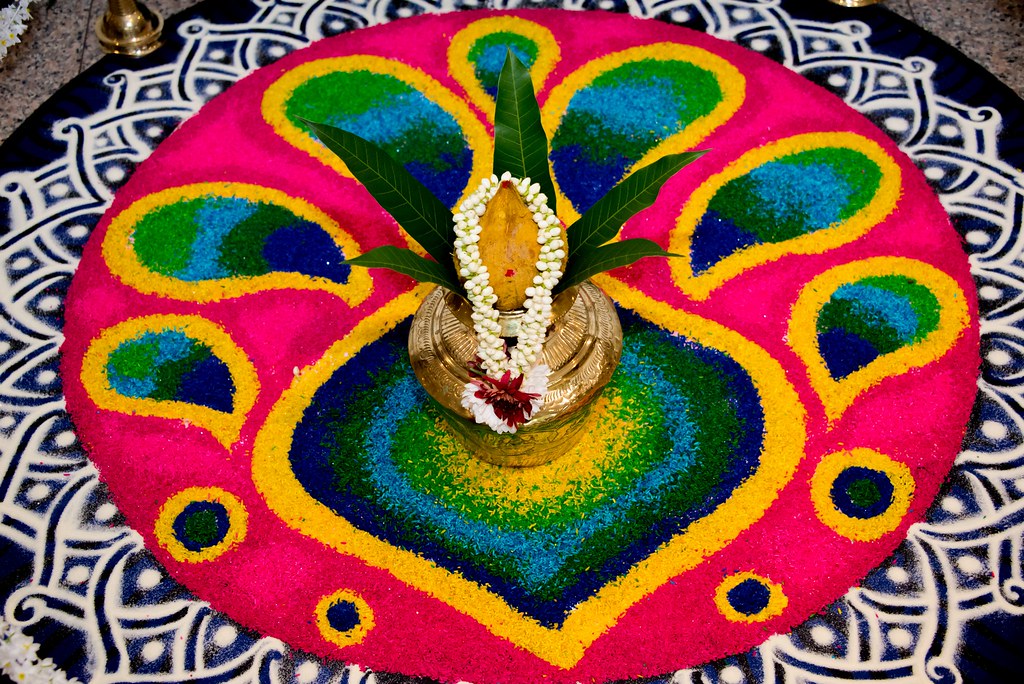 First up, the ponnurukku, or gold-melting ceremony, which took place a week before the wedding. This revolves around the groom, and is usually held in the groom’s family home, but for our purposes it was in my home. 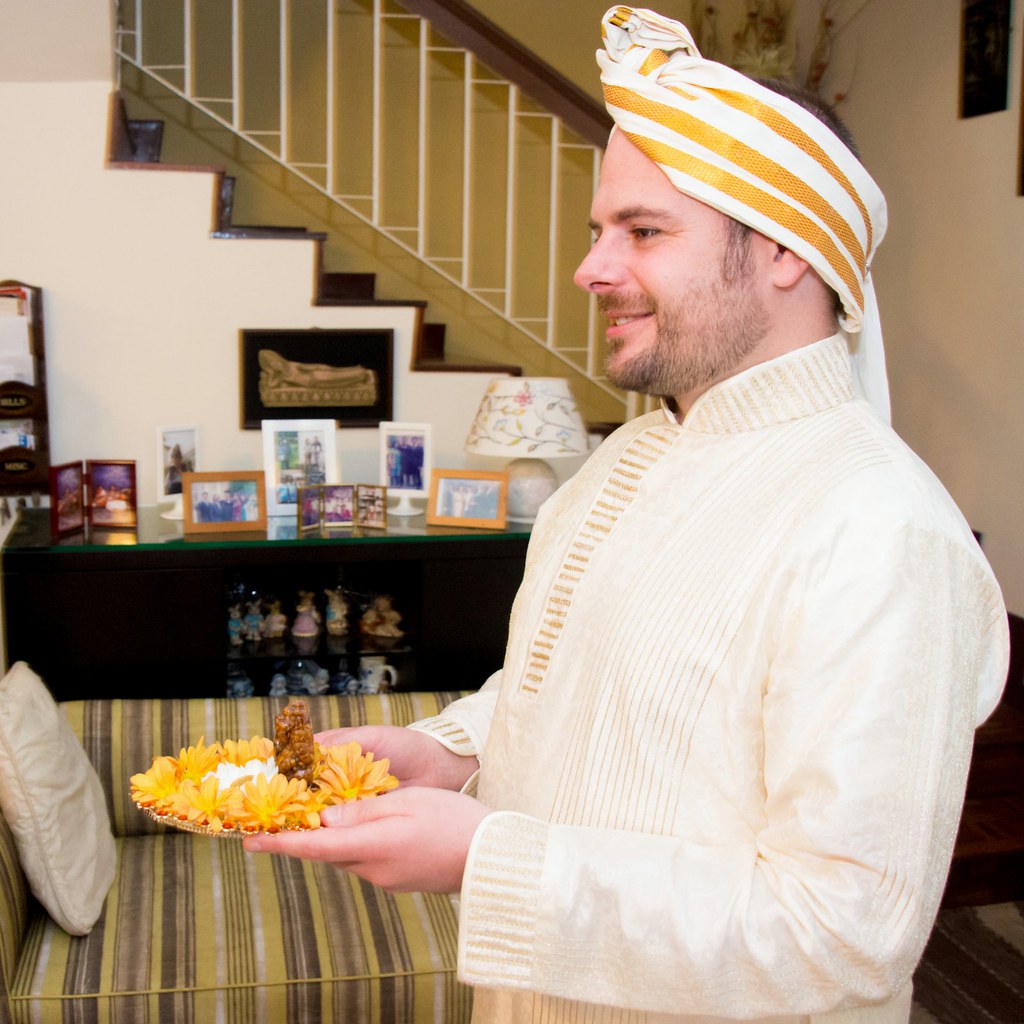 During this ceremony a piece of gold is given a ‘first melt’ by a traditional goldsmith and blessed by the family. The goldsmith then takes away the gold piece to form a pendant called a thali, which is a key part of the wedding ceremony. 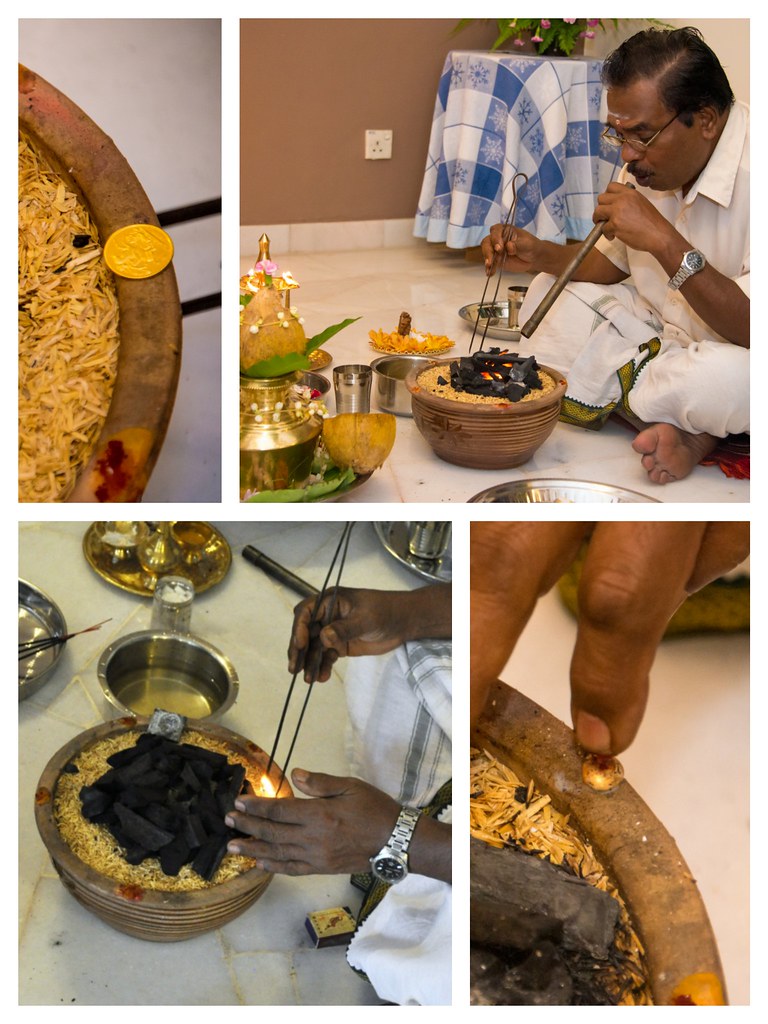 In the second half of the ceremony a cutting from a tree (called murukka maram in Tamil) is planted and blessed by married women of the groom and bride’s family. The planting and the tree itself symbolise new beginning, life, growth, and the couple’s marriage. 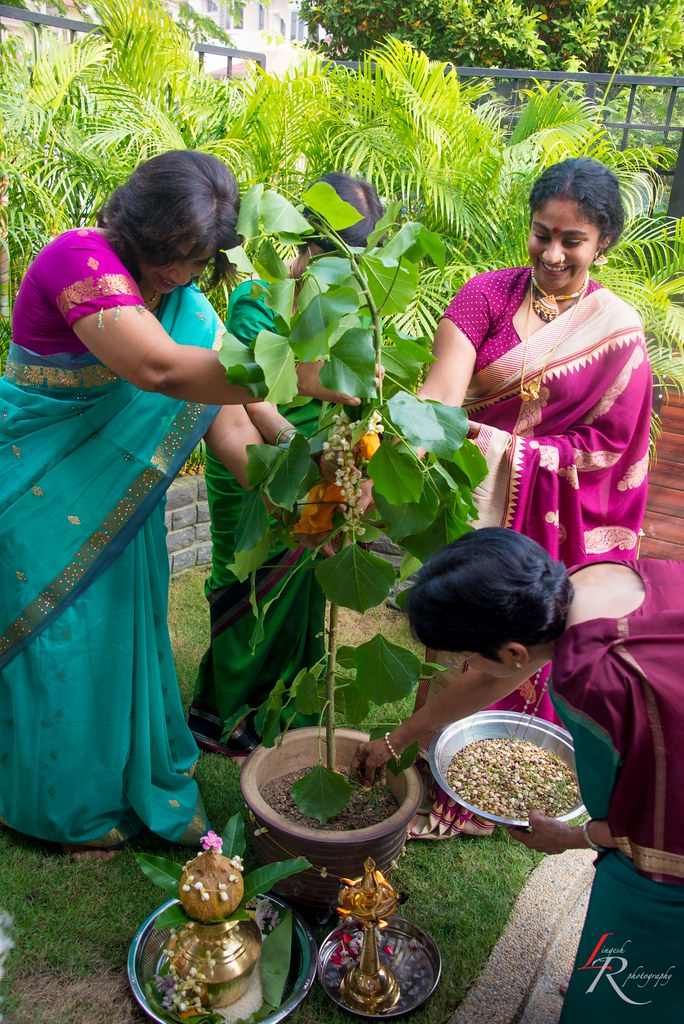 Next up was the mehndi (henna) evening, which revolves around the bride, and took place two days before the wedding. This is originally a North Indian practice, but has been adopted by many South Indian brides, and I was very much looking forward to it. Traditionally this is a women-only event – a chance for the bride to spend time with her female friends and relatives before going away to live with her husband (perhaps an early form of hen party). In our case everyone was invited, and it was another evening of catching up with friends and family before the wedding.

I had a henna artist to myself, while another artist did designs for others. 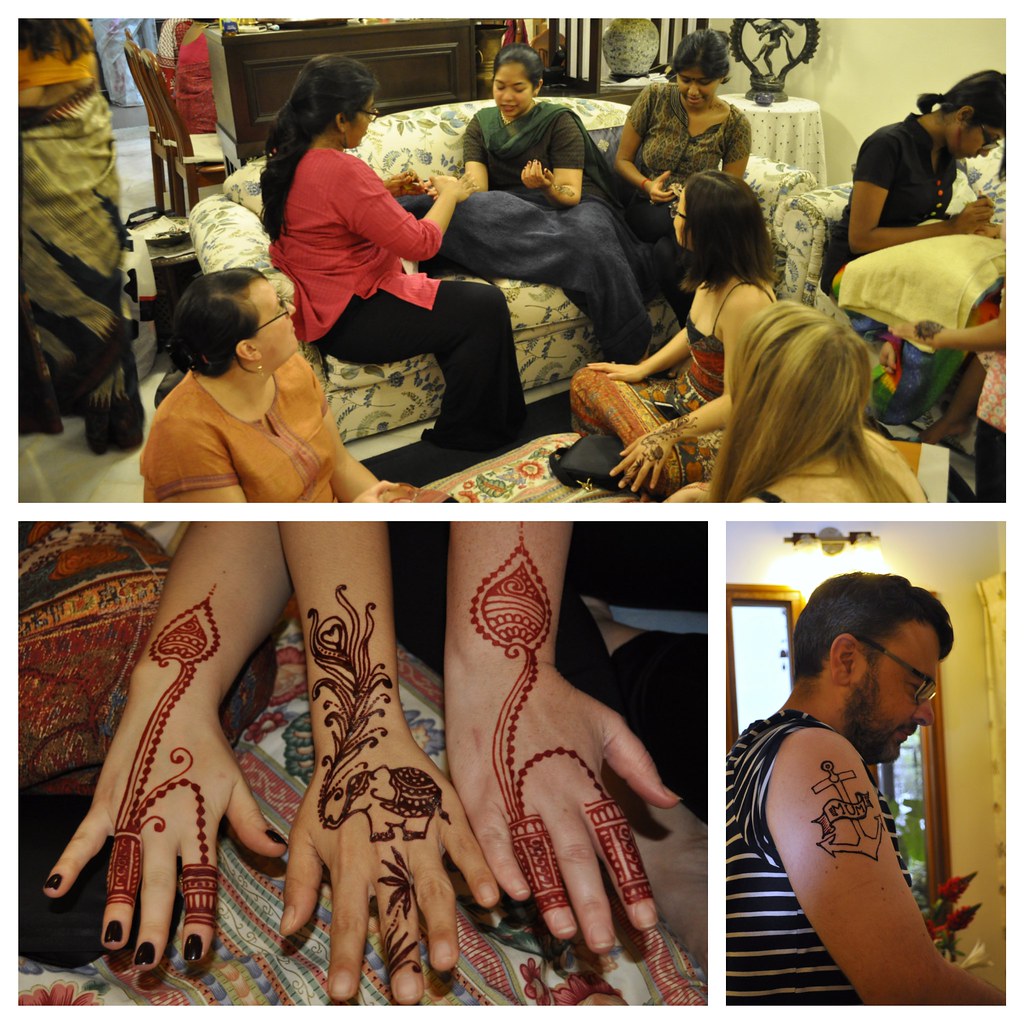 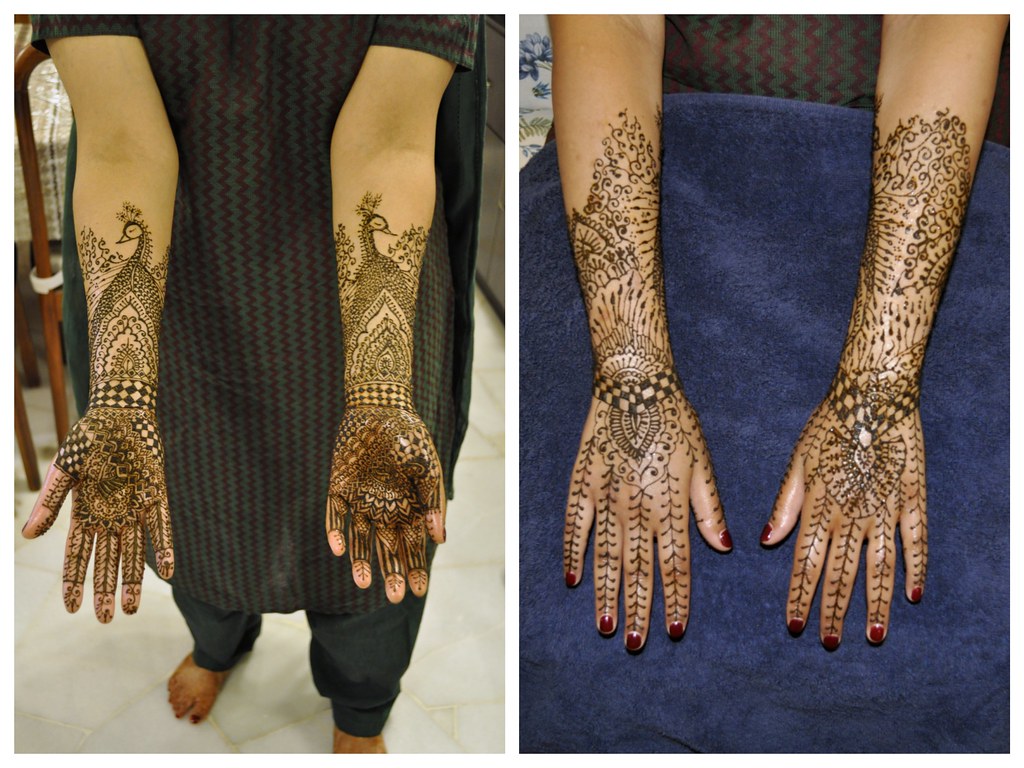 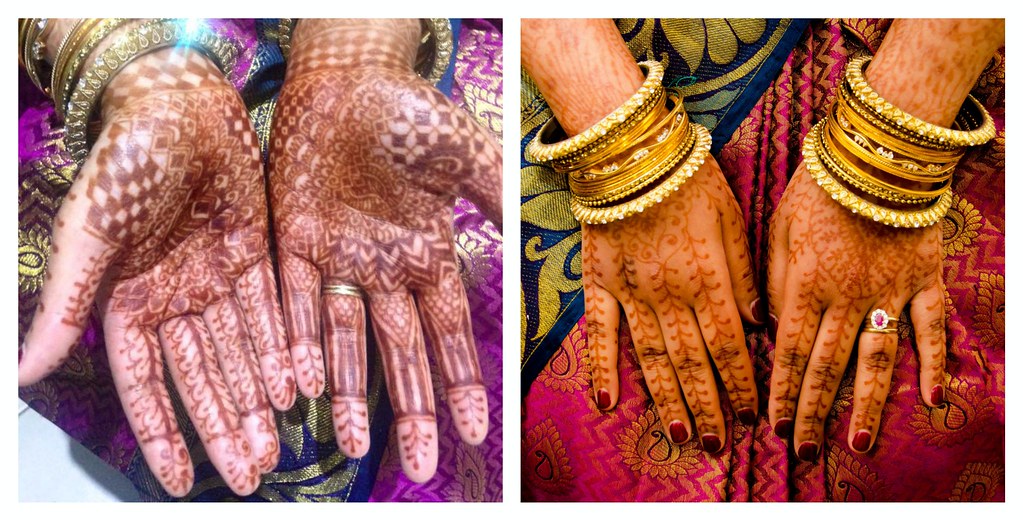 Photo on the left by my friend Felicity

And then it was the big day. There are various roles which are performed by specific family members (a married sister, maternal uncles, etc.), but often cousins and other relatives or friends are called upon to take up these roles too. Likewise, as Gareth didn’t have many of his family down in KL, some of my relatives were assigned to his family and performed roles relevant to the groom.

Our ceremony took place at the auditorium of the Temple of Fine Arts. On arrival Gareth has his feet washed by the tholan (male companion), my cousin Ashwin, who then receives a ring for his efforts. They are blessed as they enter and make their way to the wedding hall. 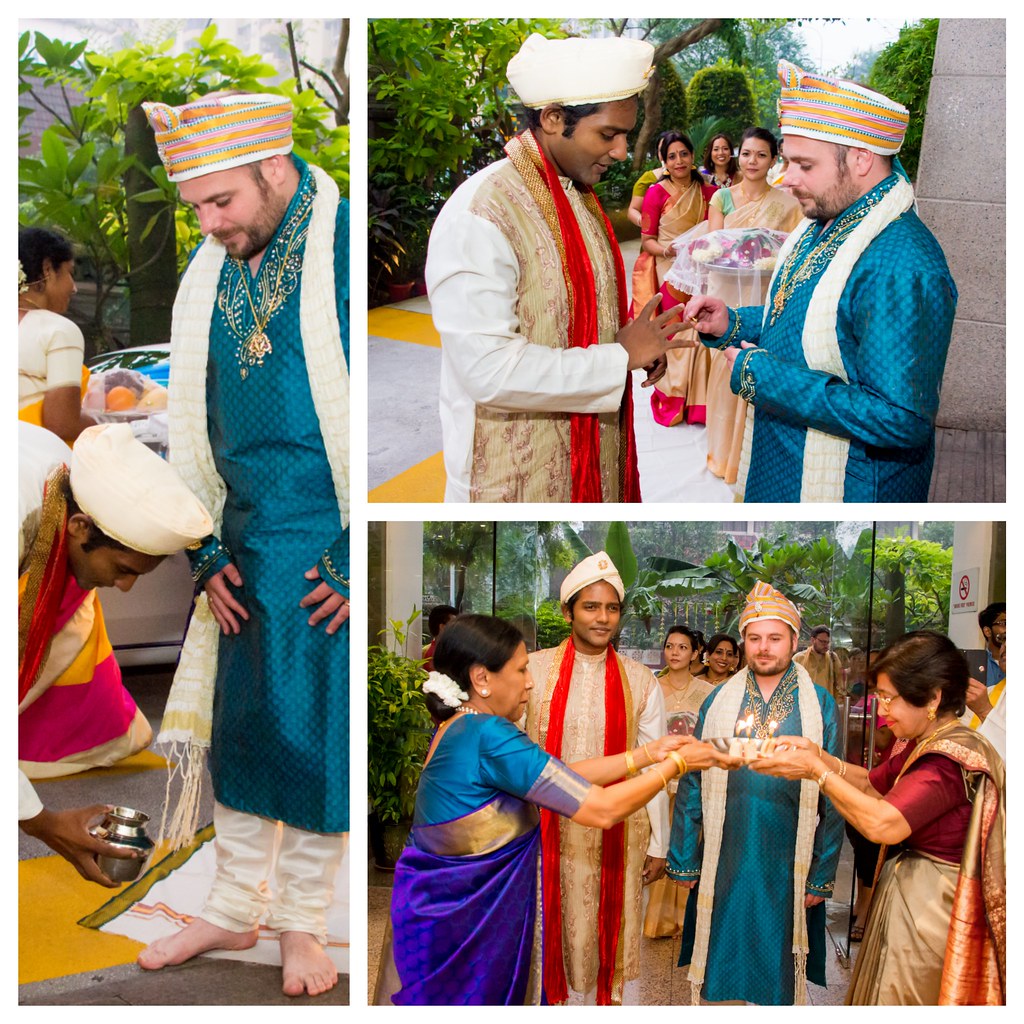 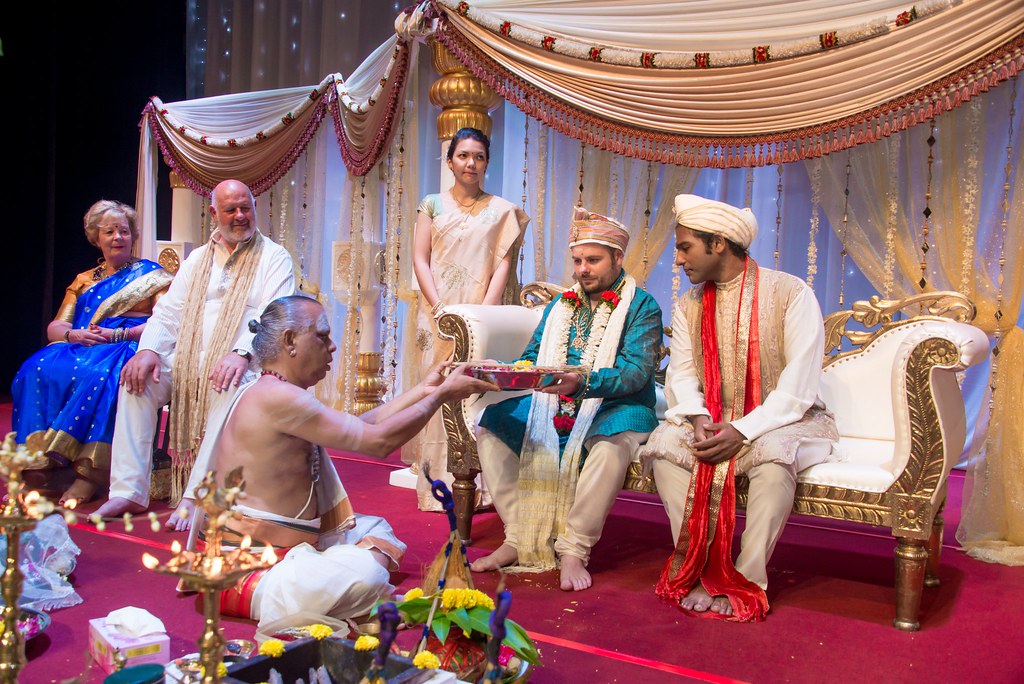 I was away backstage and didn’t get to see any of this, but soon it was time for me to join the ceremony. My cousin Sarah, the tholi (female companion) leads me in. 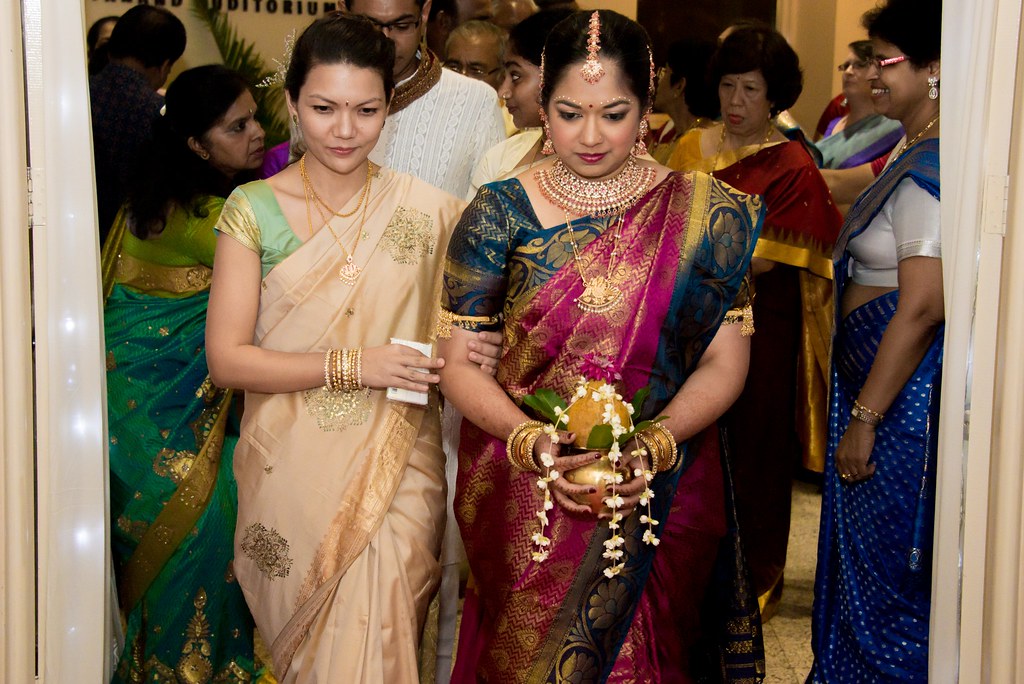 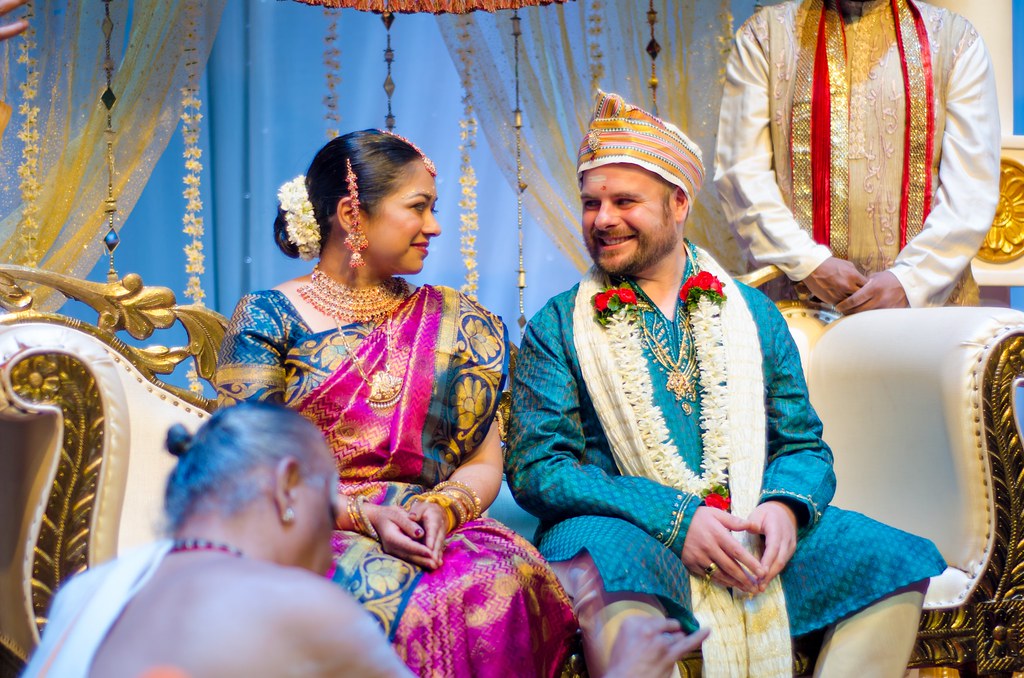 There are many, many rituals that the priest performs, which include interaction with the couple, their parents, and their relatives. For any Hindu person participating in a marriage ceremony the numerous little actions that the priest instructs them to carry out can be a little confusing, but are generally based on familiar temple rituals. However, for a non-Hindu person it must be entirely bewildering, but Gareth and my in-laws, helped along by our relatives, did a brilliant job of it all. 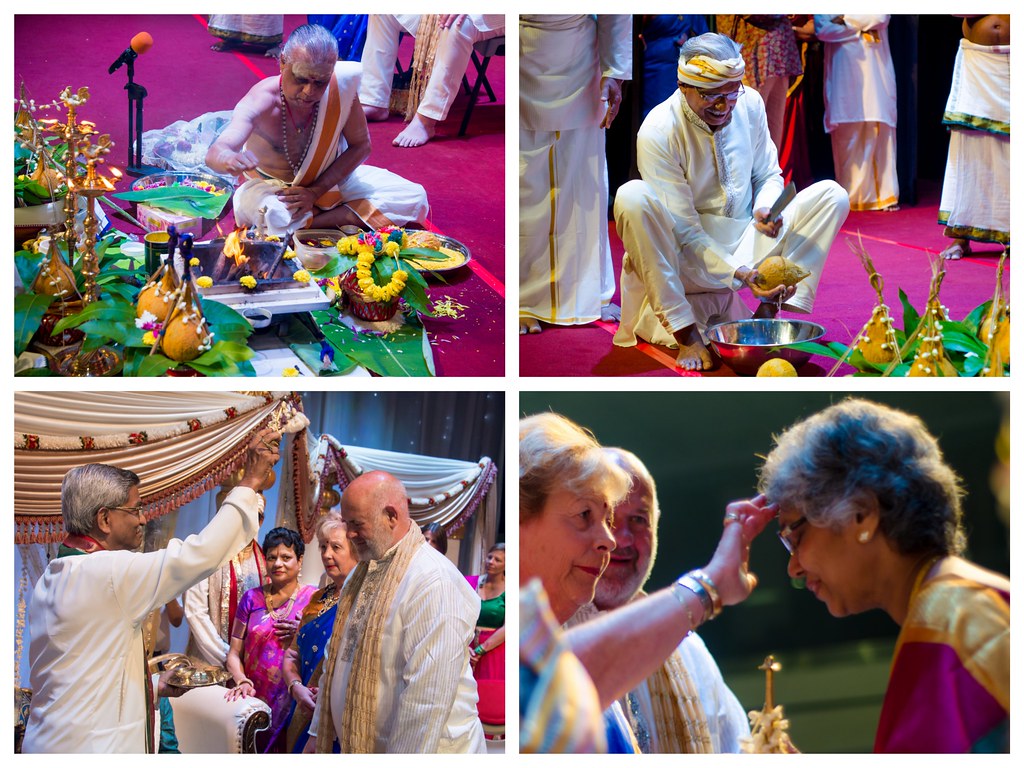 The main part of the ceremony is when Gareth places the gold thali necklace on me and dots red kunkumam powder on my forehead, and we then exchange garlands. By Hindu definitions we are now definitely married. 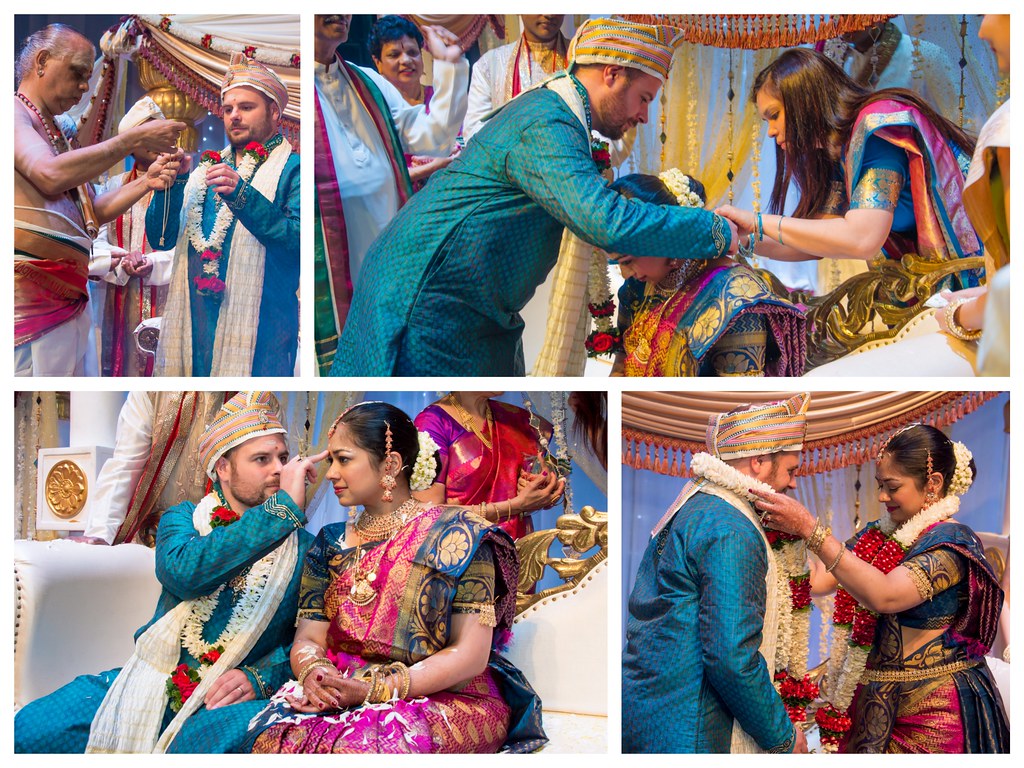 After more rituals to finish off the ceremony we receive blessings and good wishes from everyone (blessings involve showers of rice and flower petals!). 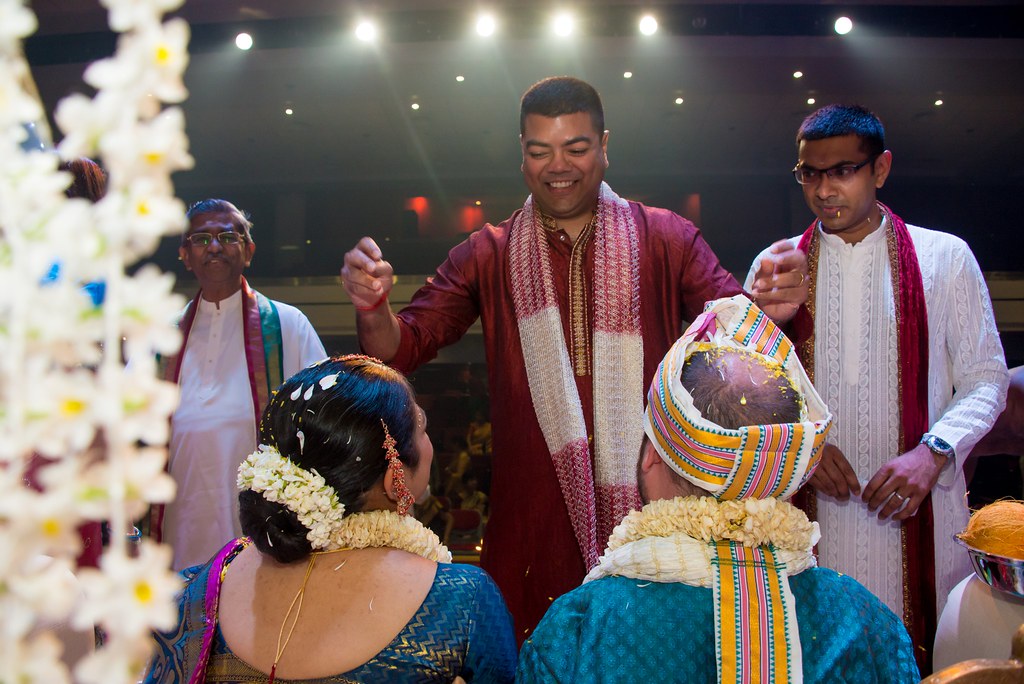 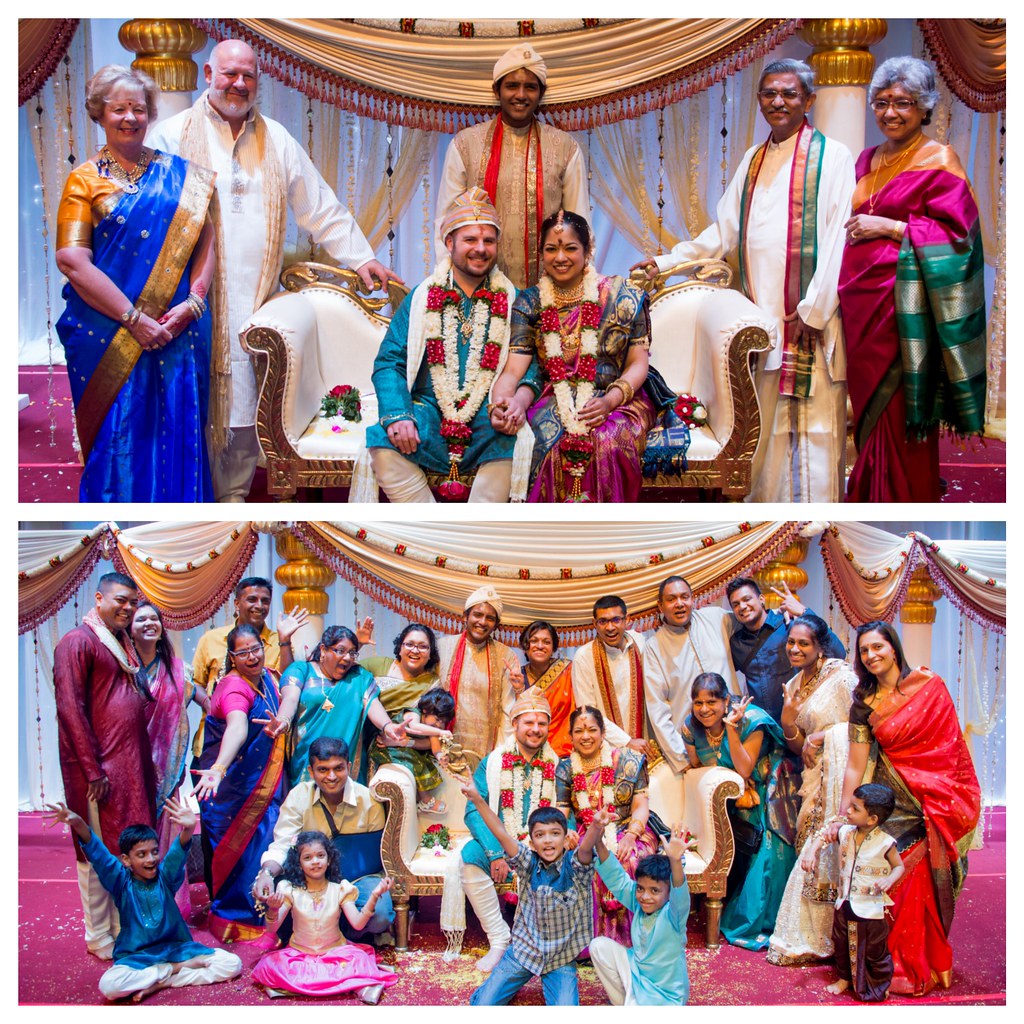 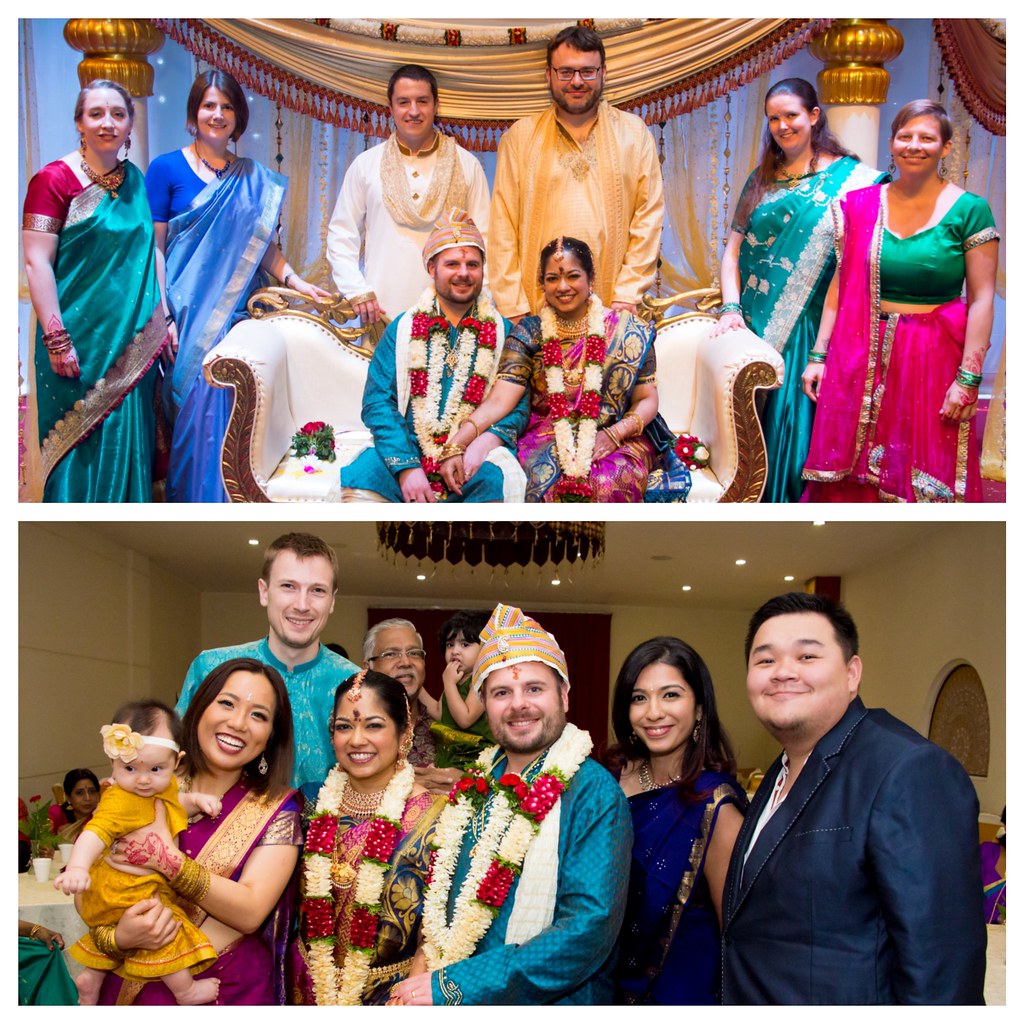 Once again we were lucky to have family and friends from various locations with us. Our visiting group were keen to participate in these traditions, our local crowd were entirely welcoming and enthusiastic about sharing our culture with the visitors, and everyone was just happy to support us and get to know each other as well.

None of this would’ve happened without the support of both our families, but my parents in particular put in so much hard work in organising the ceremonies and coordinating with us remotely across different timezones (and different opinions!). My brother Vigna’s wedding also took place the previous week, so there really was LOTS going on for our family. And as with anything that’s so important to everybody, we certainly had disagreements, and sometimes it all got a bit too much and tempers flared. But however bad our quarrels are they’re always fleeting; in the end everything happened as it was supposed to, with nothing but love and joy.

The following evening we had a small dinner reception. Being Malaysian we had to mix things up a little, and as we’re both big fans of Chinese food, a delicious Chinese banquet was a lovely way to end our celebrations. 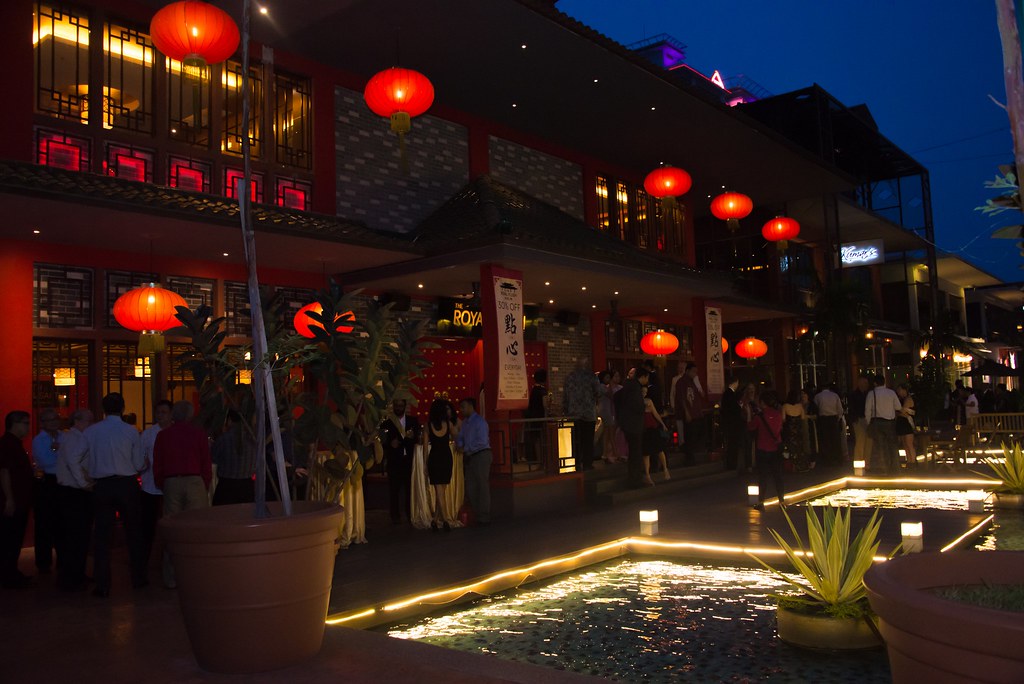 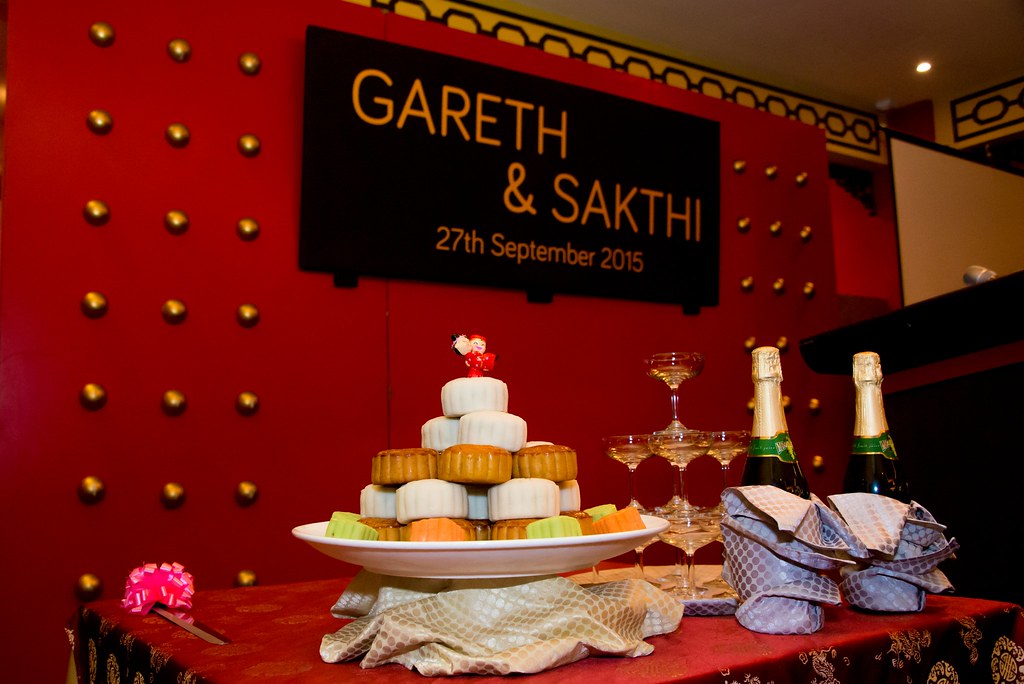 It turned out that our reception fell on the evening of the Chinese Mid-Autumn Festival. I’ve written about mooncake and this festival, both of which I’ve always loved, so I was thrilled to have a tower of mooncake at our reception (Gareth likes mooncake too, just not as much as I do…). 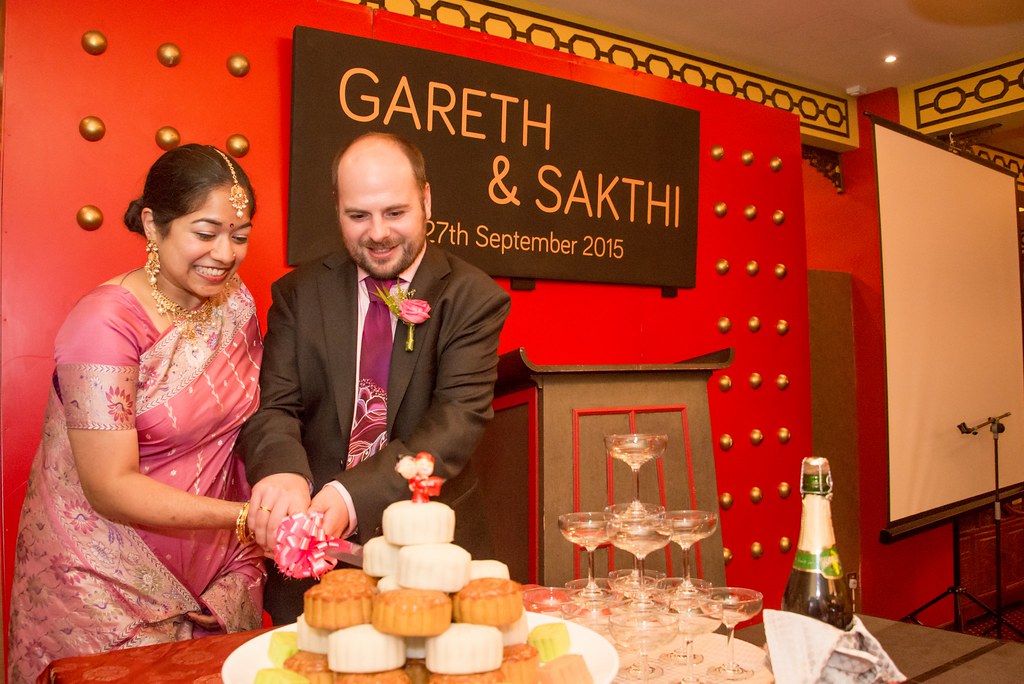 There are so many more details that just can’t practically be covered here, but they all contributed to a wonderful whole, and like our Aberdeen wedding each little thing often had a connection to somebody or something which made it special. In the end having two weddings wasn’t easy, but it was always the natural choice for us. People have asked which wedding was my favourite, and I honestly couldn’t choose.

Our KL wedding was very much an expression of my culture and traditions that have been a big part of my life, and while my husband has always been great about opening himself up to my Malaysian world, this took it to a whole new level. Gareth wasn’t just a bystander though, he was involved in a lot of the planning, and made clear what he was and wasn’t comfortable with. He enjoyed the experience and is proud to have it as part of his life too.

Our Aberdeen wedding, on the other hand, involved traditions that have been part of Gareth’s life and that I’m familiar with, but it was also very much an expression of us as individuals and as a couple. Both taught us a lot about each other and ourselves, and deepened our bonds with our families. 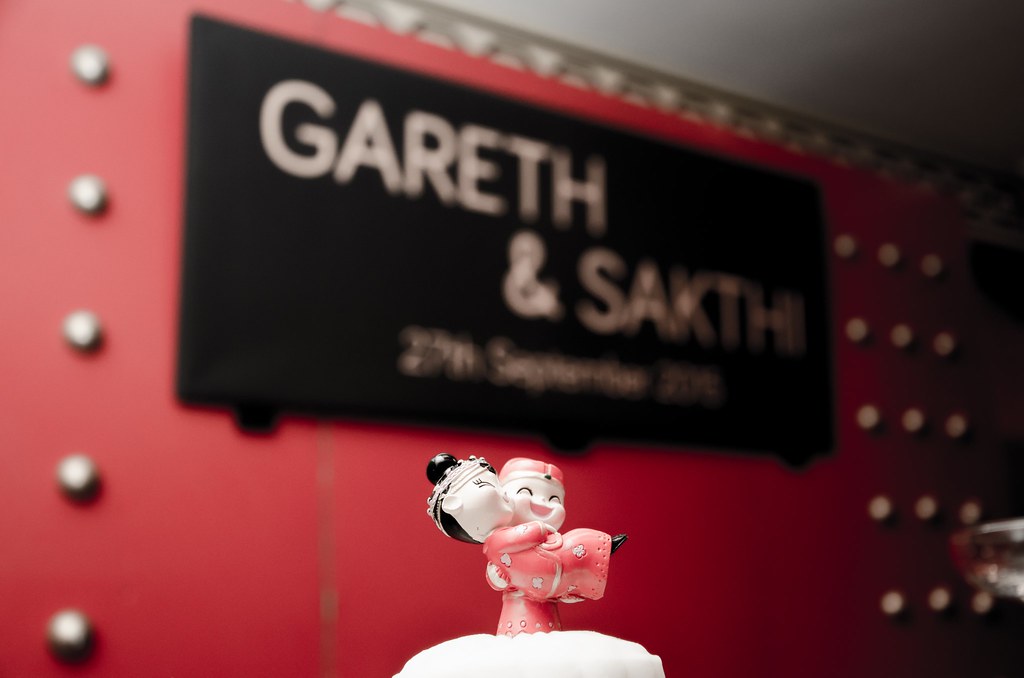 All original images by Kronoz Photography unless stated otherwise.