We made a day trip out of Tokyo to the spectacular mountain town of Nikko, home to many historic and natural attractions. We visited some of the shrines and temples which have been designated a UNESCO World Heritage Site.

We got the bullet train to Utsunomiya, and then a regular train to Nikko, where we met our guide, Emiko-san. Our first stop was the sacred Shinkyo bridge, where, it is said, the monk who first brought Buddhism to Nikko was able to cross this river after the gods came to his aid and created a bridge of snakes. The water of the river Daiya is sparklingly clear, and Emiko-san declared that the best sake comes from Nikko because of the quality of its water. 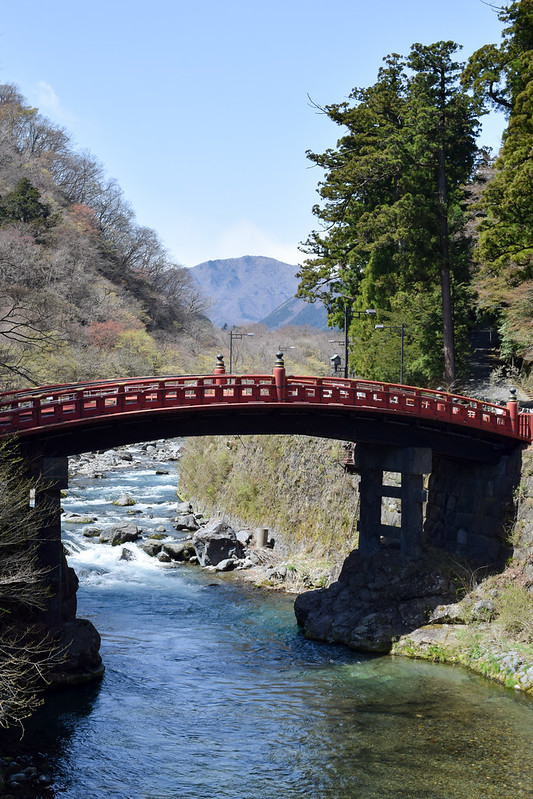 We also made a quick stop outside a museum building for a look at their cherry blossoms. Being in the mountains, Nikko is a lot cooler, so the cherry trees here had just come into bloom. 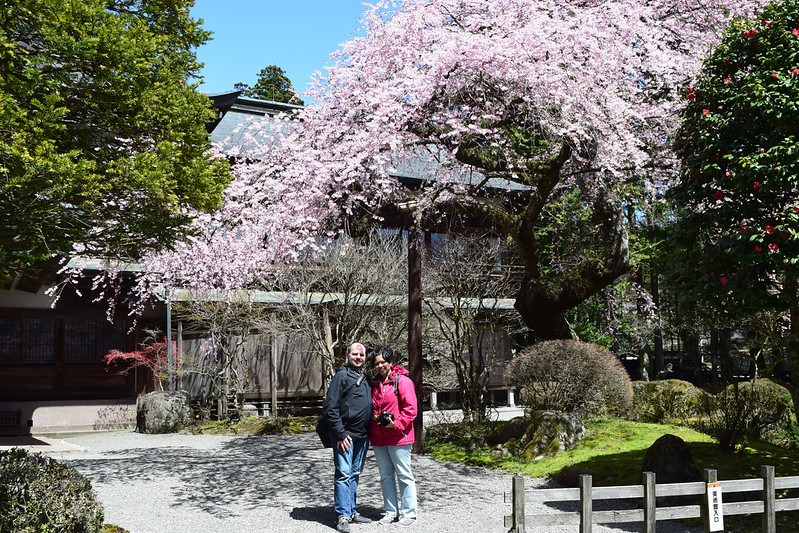 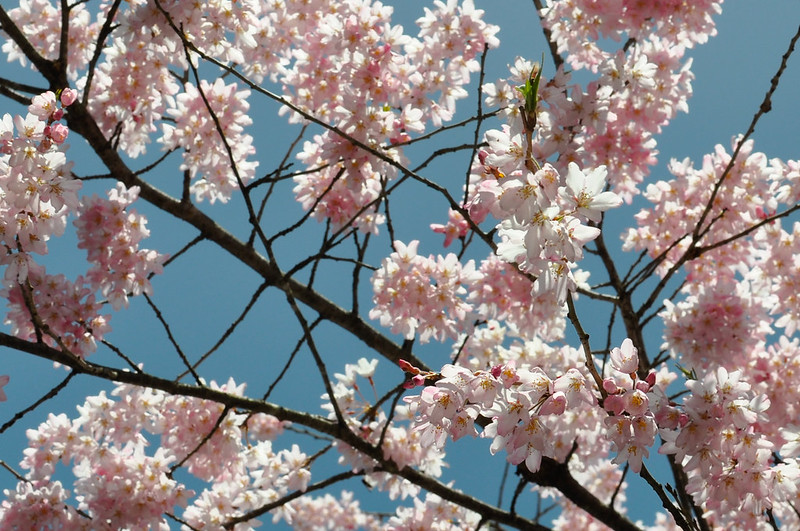 Then we headed over to the Toshogu shrine, built in 1617 as a mausoleum for Tokugawa Ieyasu, the first shogun of Japan. There are many building within the Toshogu shrine, and even the storehouses and stables are beautifully and elaborately decorated. 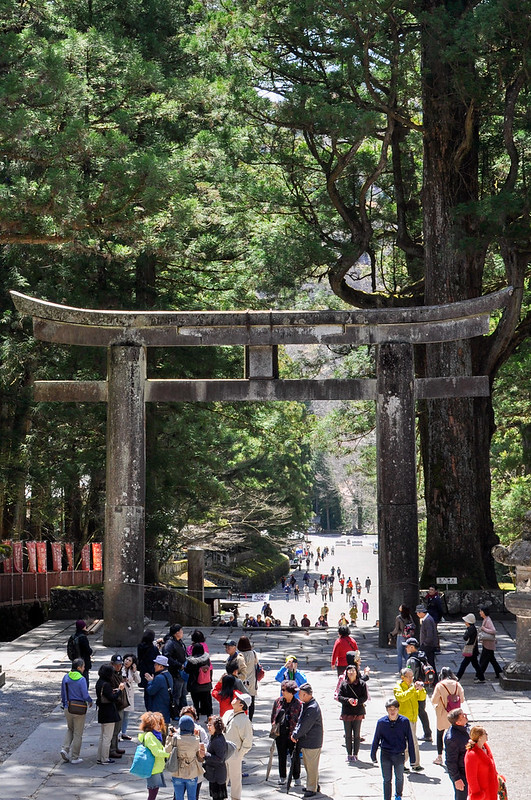 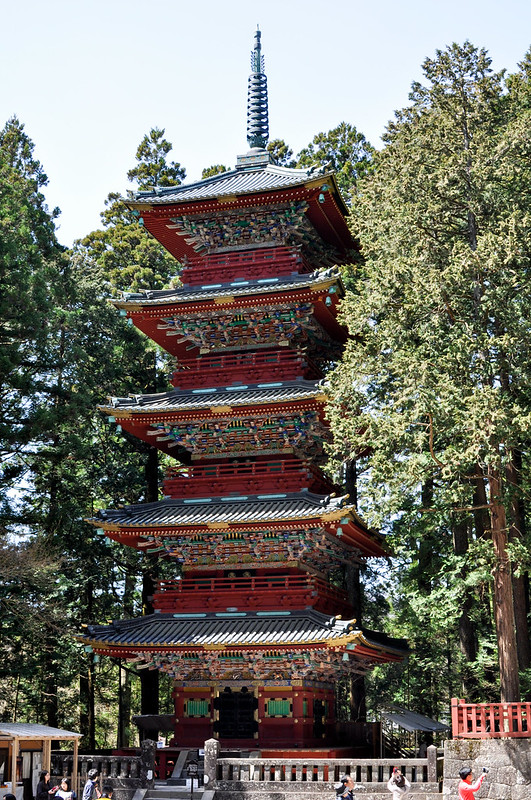 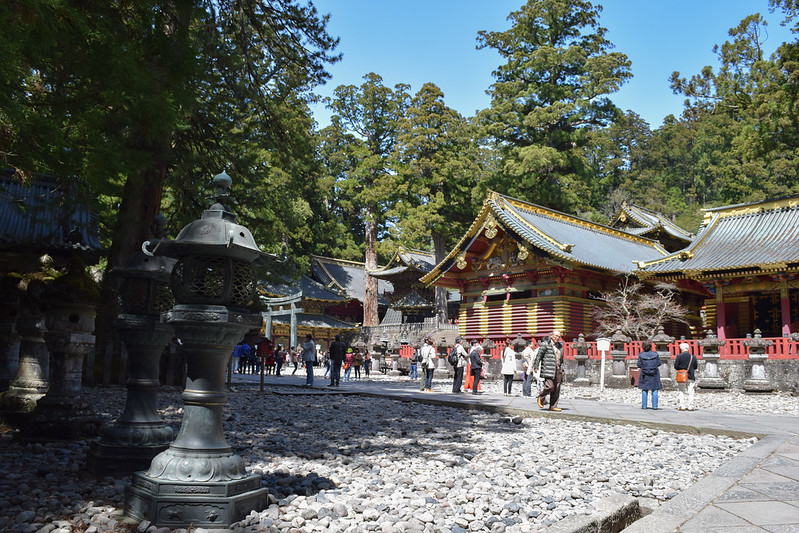 The stables has a series of panels depicting the cycle of life in the form of monkeys. One of these panels popularised the ‘3 wise monkeys’ proverb of “see no evil, hear no evil, speak no evil”. In the context of the panel series here, it is about teaching children morality and right from wrong. 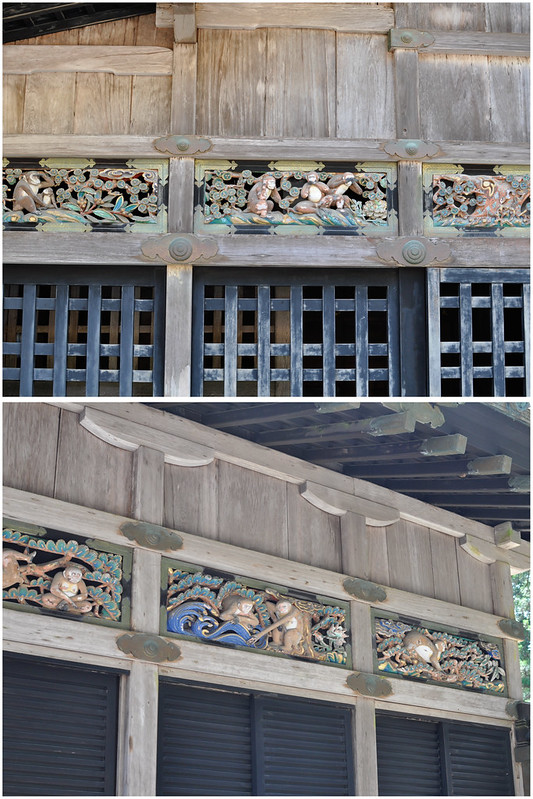 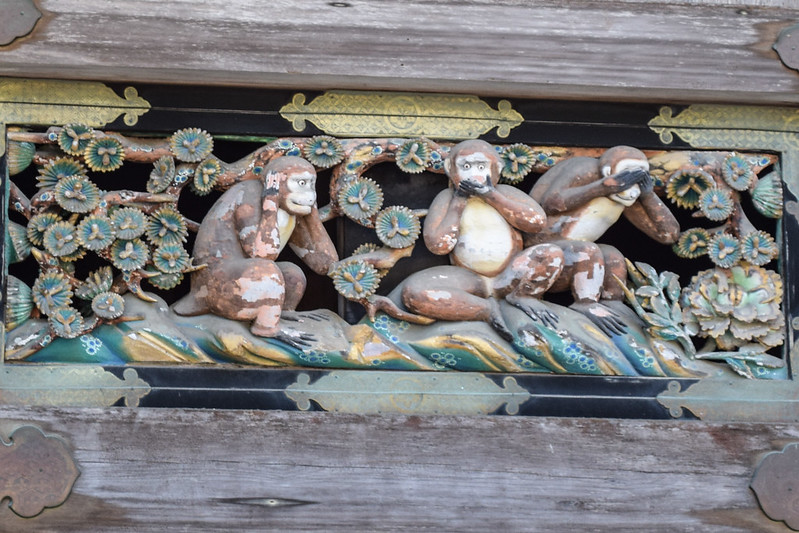 The Toshogu shrine complex contains combined elements of Shinto and Buddhism. Our guide pointed out details such as a torii gate (Shinto) with lotus embellishments (Buddhist) around its base pillars. In the main gateway structure there are Nio (Buddhist) guardians on one side, and ‘lion-dog’ (Shinto) guardians directly behind them on the other side. 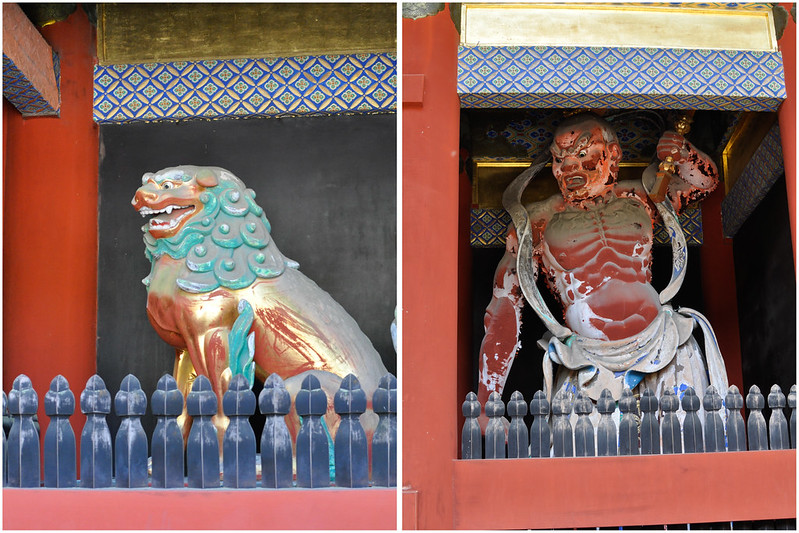 Further on, up many steps, is a structure where Tokugawa Ieyasu’s remains are kept. 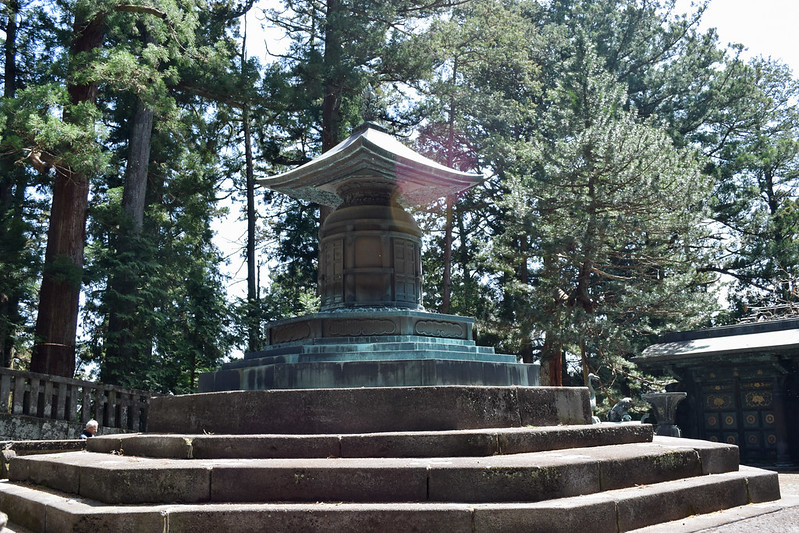 We came back down and then entered the inner shrine through this stunning gate, which shows the feudal lords of Japan at peace and in the service of the shogun (photography wasn’t allowed beyond this point). 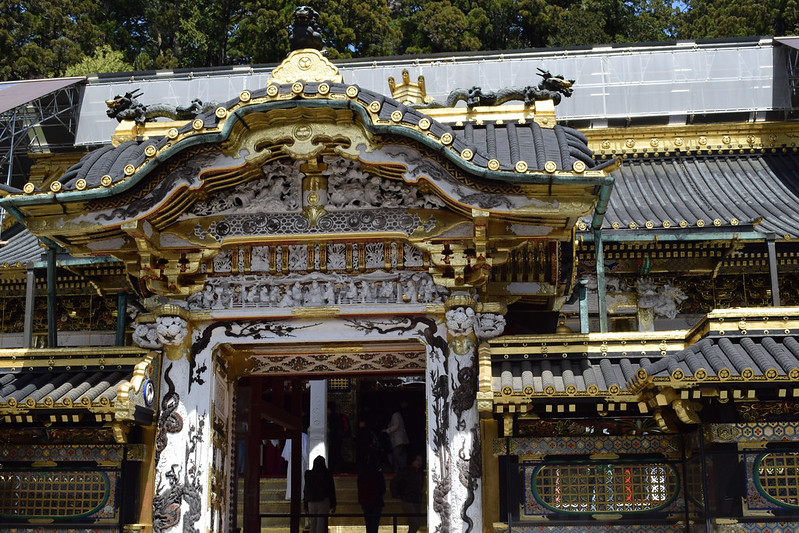 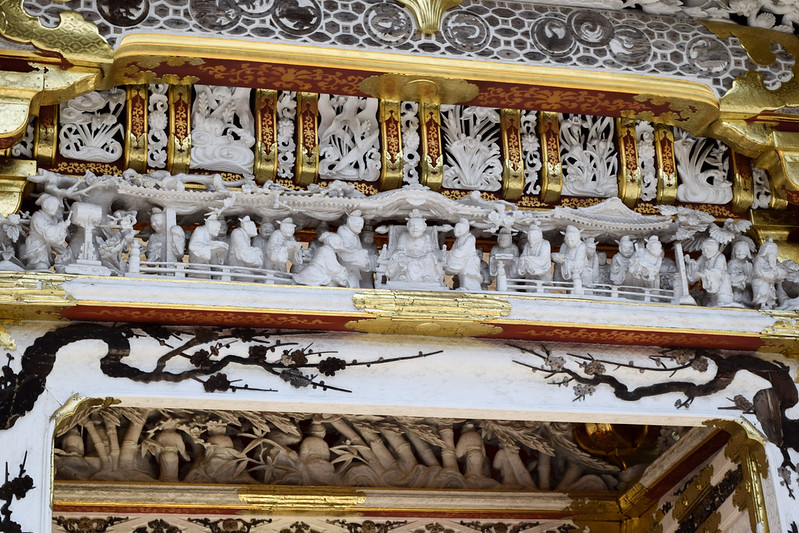 All around the shrine there are many, many exquisite carvings of flora and fauna, especially birds. 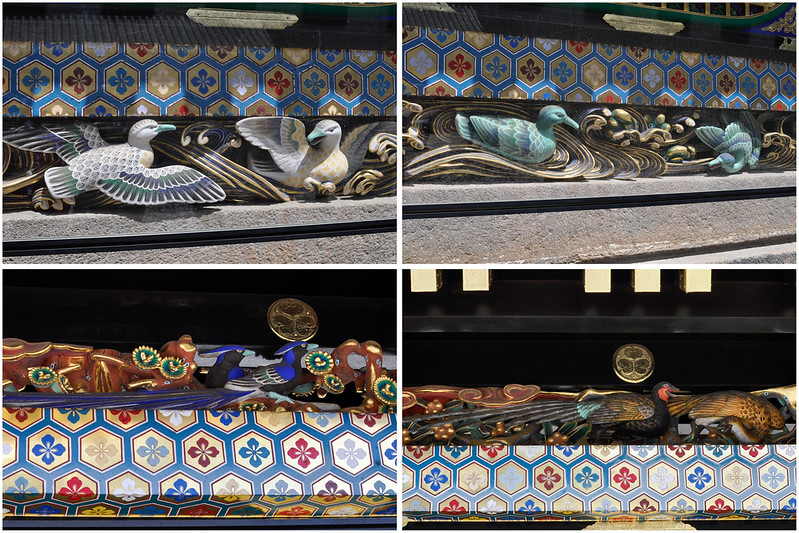 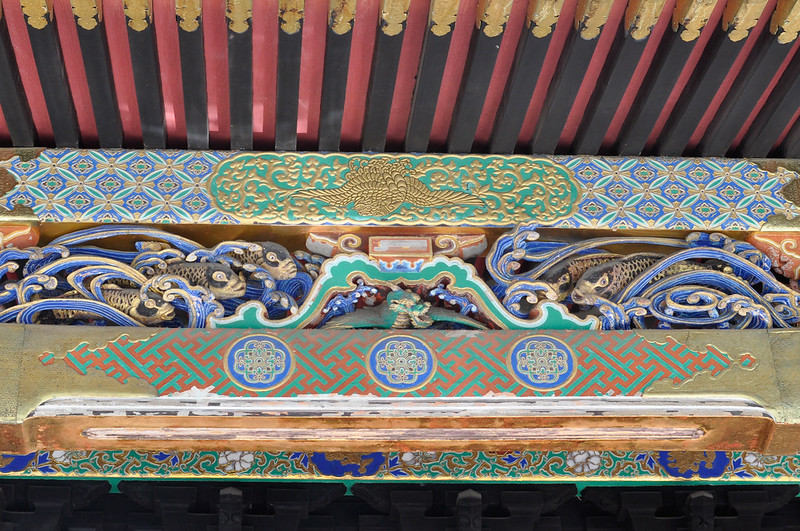 Tokugawa Ieyasu was born under the Chinese zodiac of tiger, and he favoured tiger imagery as a representation of himself, his fierce conquests, and as a warning to all who may think of opposing him. However, once he took on the title of shogun he ruled a unified Japan in a time of peace and development. This time of peace is symbolised on another gate, where there is a carving of a sleeping cat amongst flowers, and a pair of sparrows carved directly behind it. Of course, when we bought an omamori from this shrine, we got the one of the sleeping cat. 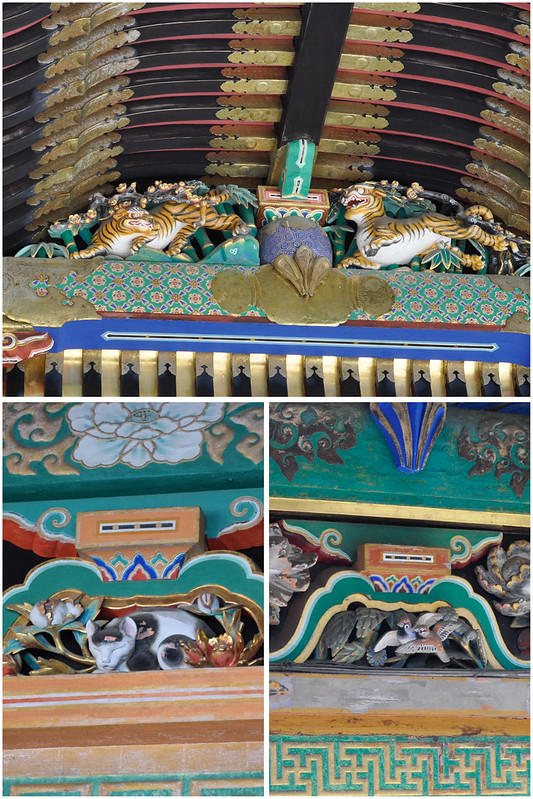 After spending the morning here we stopped for lunch at a little shop, and had yuba soba, a Nikko specialty. Yuba is tofu skin wrapped around to form a cake, served with soba (buckwheat) noodles. 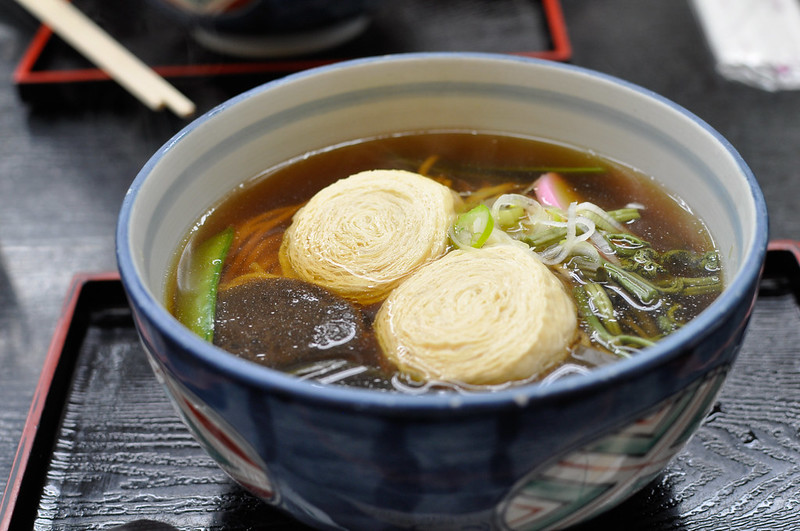 Then we went to the Rinnoji temple. This is under major restoration, so it is fully covered by a huge scaffolding structure, which makes it look, from the inside, rather like a shipyard. We were allowed to view some of the statues and relics on temporary display, and to look in from high observation decks at some of the work taking place. This also offered lovely views of Nikko. 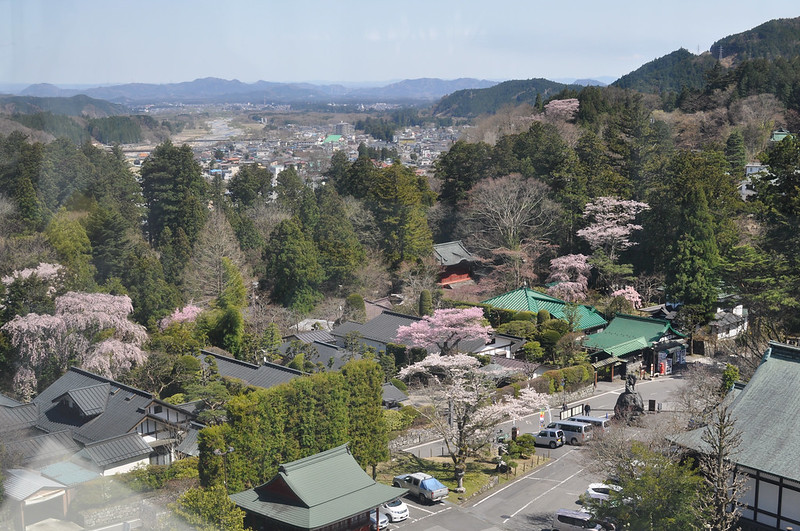 We also had a stroll around the peaceful, moss covered garden here. 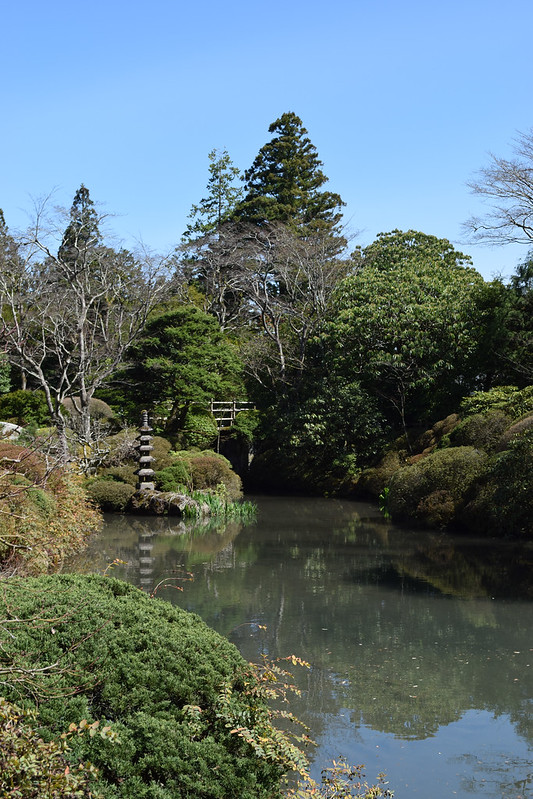 A serene viewing spot, bringing the sacred Mount Nantai ‘into’ the garden. 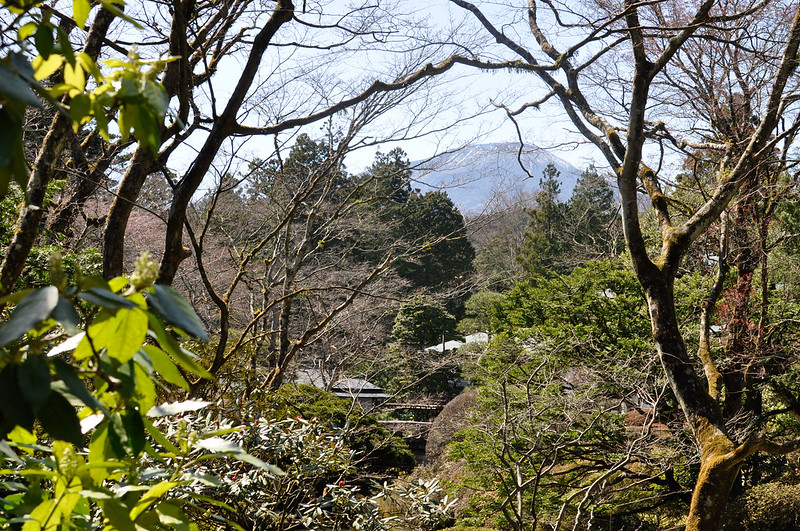 We then walked up to the Imperial Palace Villa, which showcases classic Japanese wooden architecture. Erected in 1899, it was the summer residence of the Imperial family until World War II, and then later restored and opened to the public in 2000. 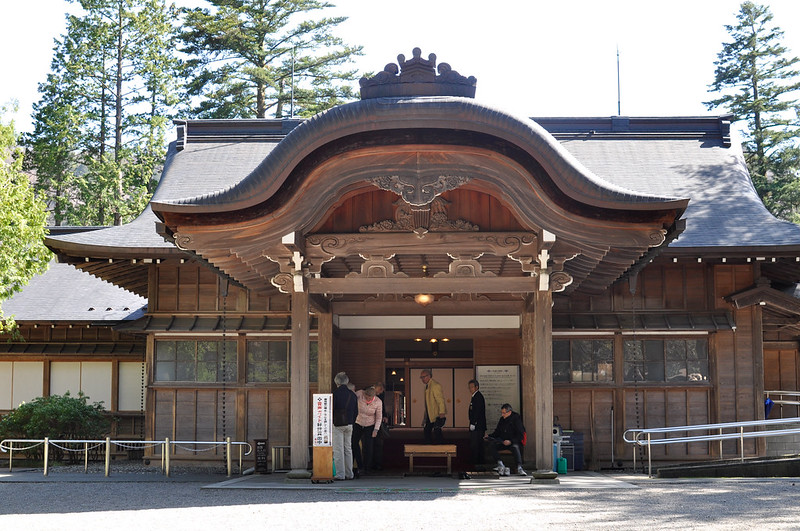 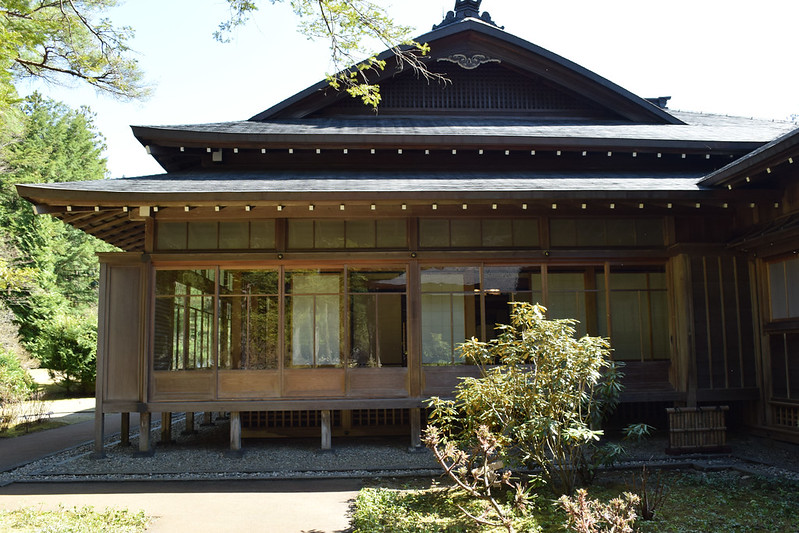 Inside, it is an interesting mix of traditional Japanese style with European influences, such as sliding paper doors and tatami mats, along with European light fittings, and a billiard room. 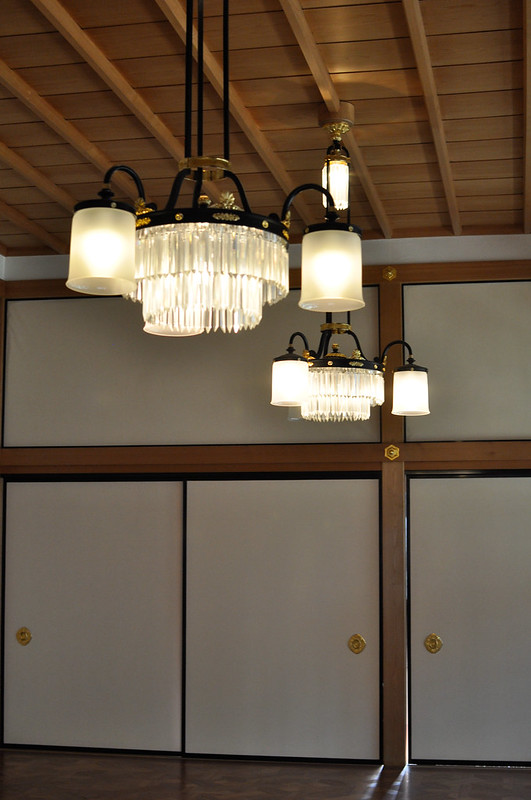 The grounds are expansive and stunning, featuring a 400 year old cherry tree; its ancient boughs are propped up by tall wooden posts. 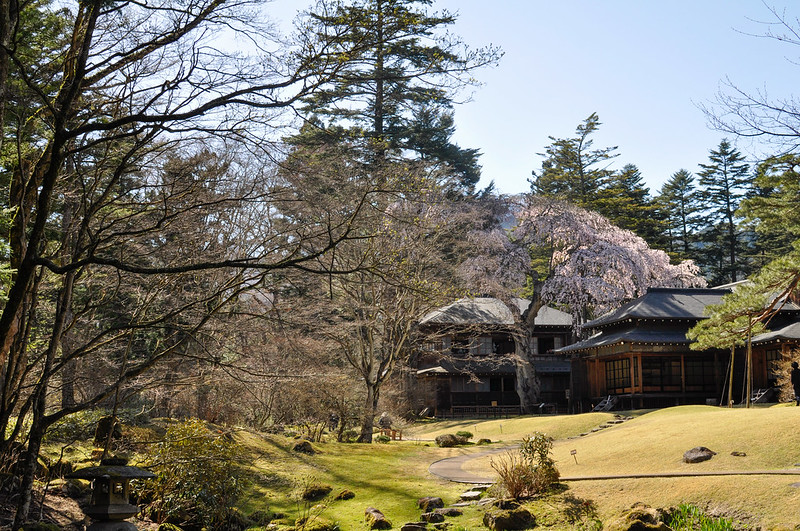 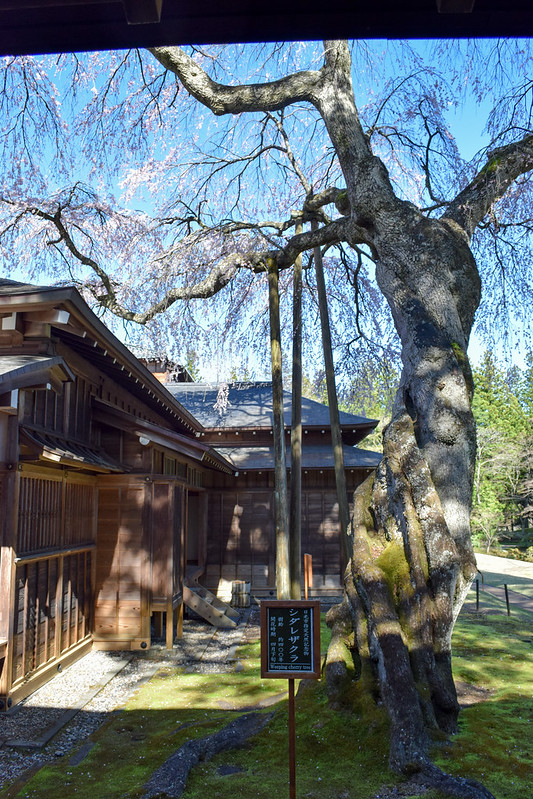 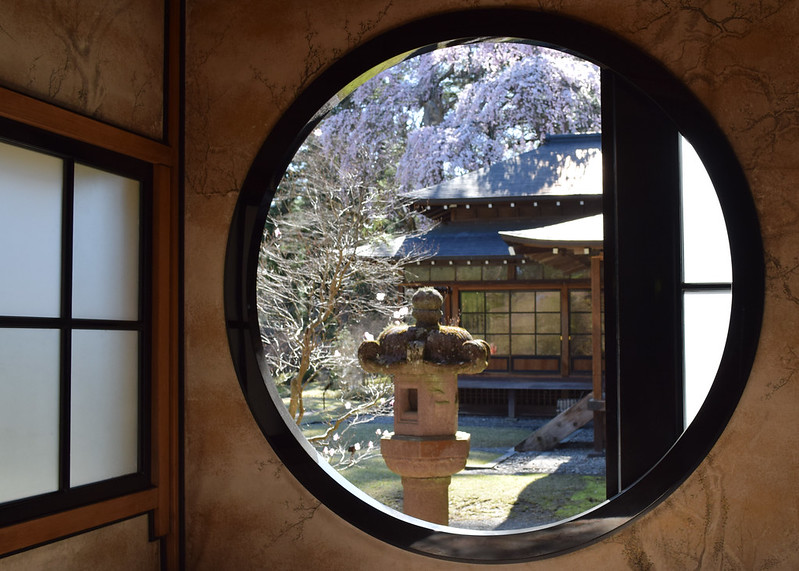 A beautiful finish to our day in Nikko.