A big part of our trip to Japan was of course the food. I’ve already mentioned kushiyaki and yakitori at the izakaya we found on our first day, and on day two, during our guided tour of Tokyo, we had tonkatsu. This has its roots in Western pork chops, and is usually a pork cutlet, breaded and deep fried, then served with rice, a refreshing Japanese cabbage salad, and the special tonkatsu sauce, said to be derived originally from Worcestershire sauce – so yummy I drowned everything in it. As well as pork there are chicken, beef, and prawn versions as well. 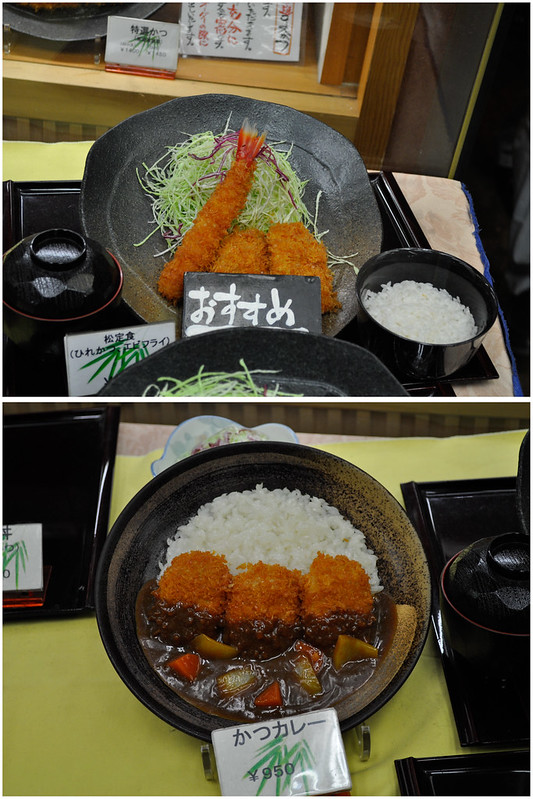 We had wonderful sushi and sashimi. Tuna remained the top favourite, but there was also a particular ‘white fish’ which we couldn’t identify but tasted wonderful. There were some ‘try anything once’ items as well, like sea urchin – once was certainly enough. In some places we were served fresh wasabi root with a little grater. This is the ‘real’ wasabi, as opposed to green coloured horseradish, which is what we would normally get in the UK or even in smaller restaurants and takeaway sushi meals in Japan. This is because fresh wasabi is expensive to grow, and the flavour lasts for a very short time, so you have to grate it as you eat. It tasted fantastic – the hit is even stronger than typical wasabi paste, but there isn’t the unpleasant feeling of it going through your nose. 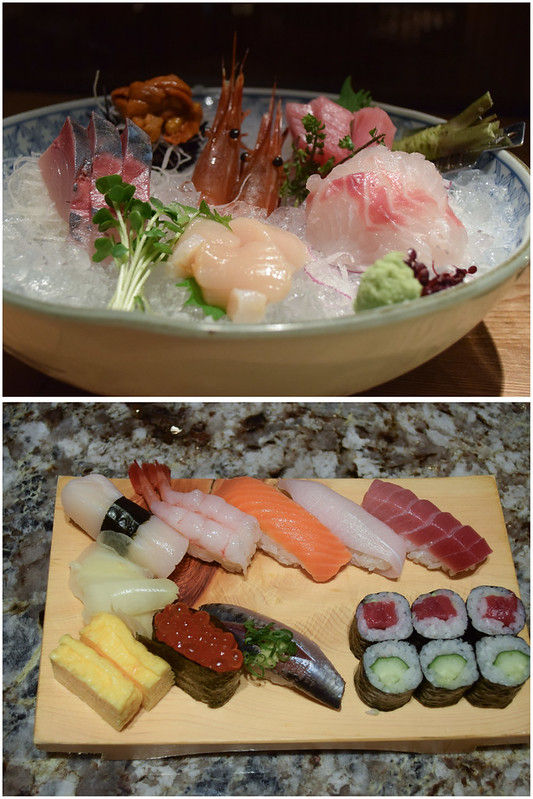 We also visited the Tsukiji fish market, the largest wholesale fish market in the world – this was an early morning start! There is an outer retail section selling groceries and kitchenware, and limited access to the inner wholesale market (visitors are allowed only after 9am, when the main wholesale trading has finished). Fish markets are always interesting, and this was no exception. One of the lasting impressions I have is of realising just how big tuna fish really are. Outside there are also many little restaurants serving the freshest fish for breakfast – we didn’t try this though, we were too hungry to face the huge queues. 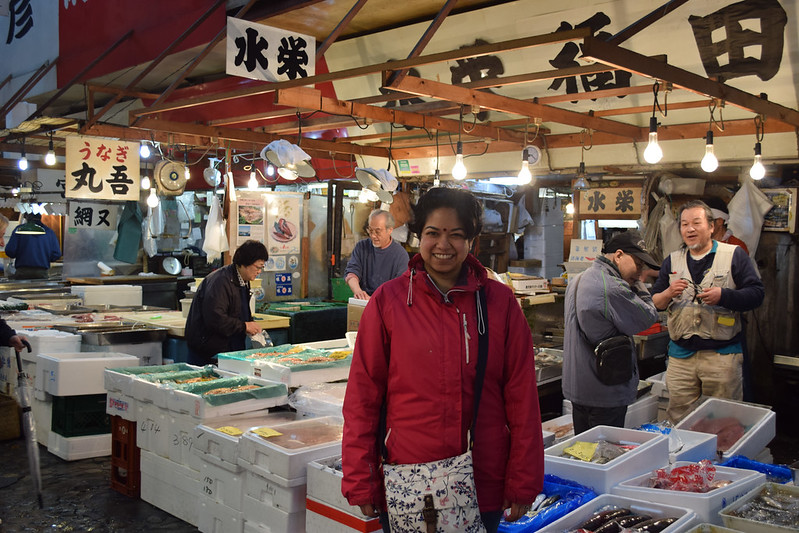 We also got acquainted with fresh bamboo shoot, a delicacy in Japan. We saw it growing in gardens and being sold in markets, and enjoyed it in meals. 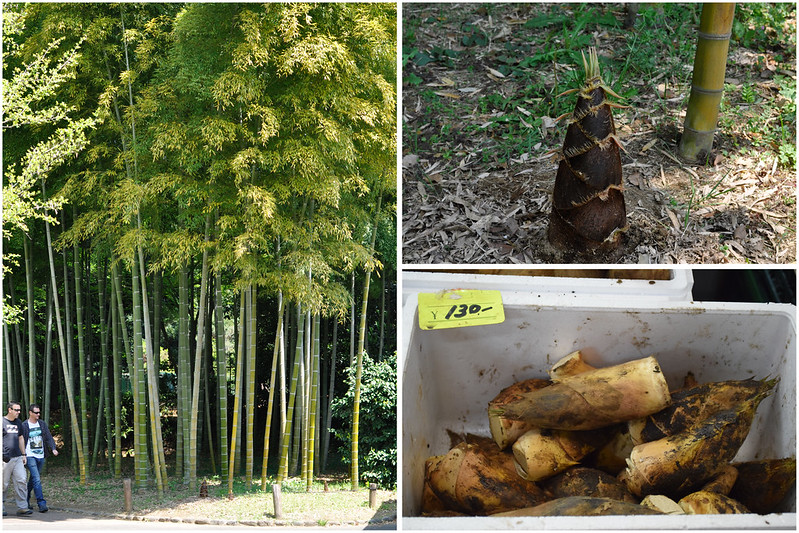 This is grilled bamboo shoot served with myoga bud, which was another amazing ingredient we came across in Japanese food. It’s commonly used as a garnish, and has such a lovely sweet-sourish, zingy, gingery, taste – it is a member of the wider ginger family, and reminded me of galangal and torch ginger. 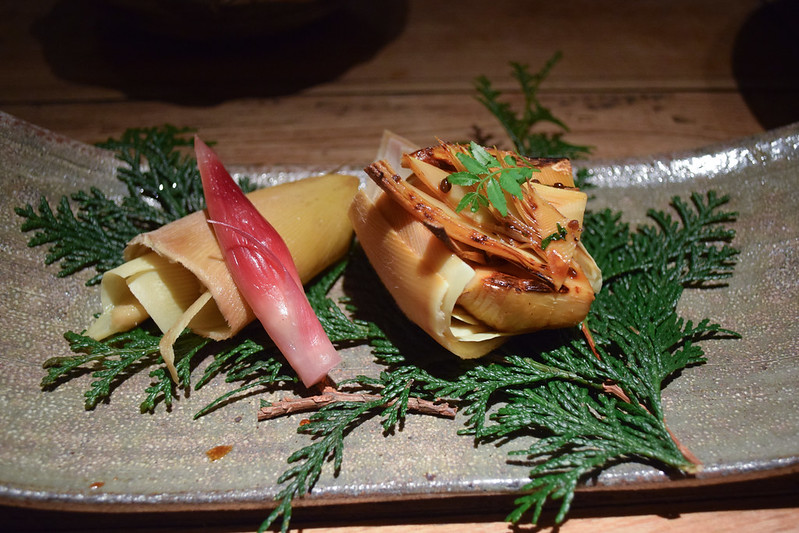 One evening we happened to end up in a restaurant specialising in Okinawa cuisine. We had tofu topped with sukugaras, an Okinawan seasonal delicacy of salted baby rabbitfish. There was also pork coated in black sesame paste – to die for, as well as Okinawa style tempura, which has a thicker batter. All washed down with awamori based cocktails (awamori being an Okinawan spirit distilled from rice). 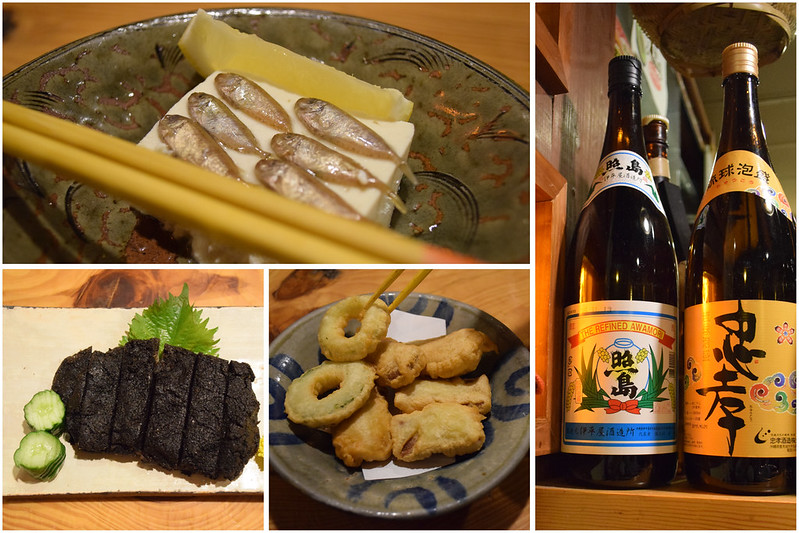 Less attractive, but no less interesting I think, is the breakfast I had in the hotel in Tokyo. I enjoyed the Japanese section of the buffet – it wasn’t fancy, but it tasted good. 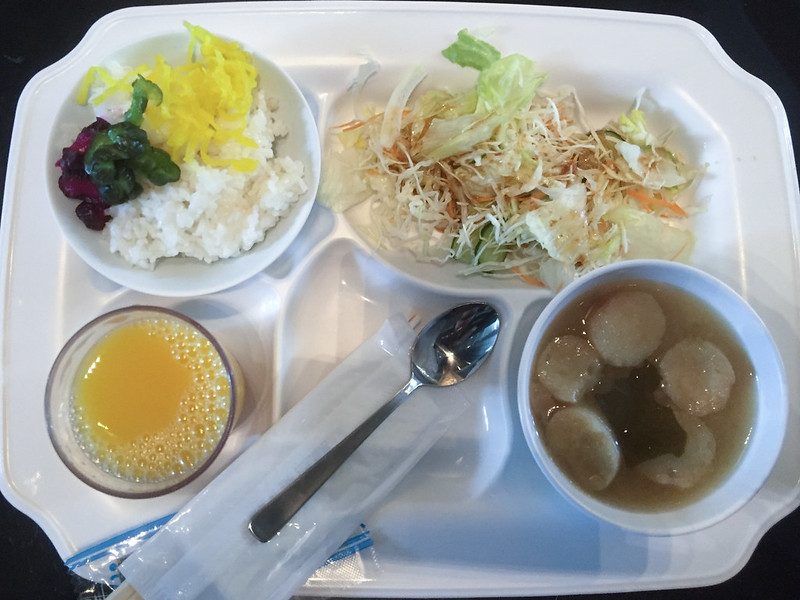 Although we didn’t try them, we did come across vending machine restaurants. These two were in Tokyo Central train station, while beer vending machines were everywhere! 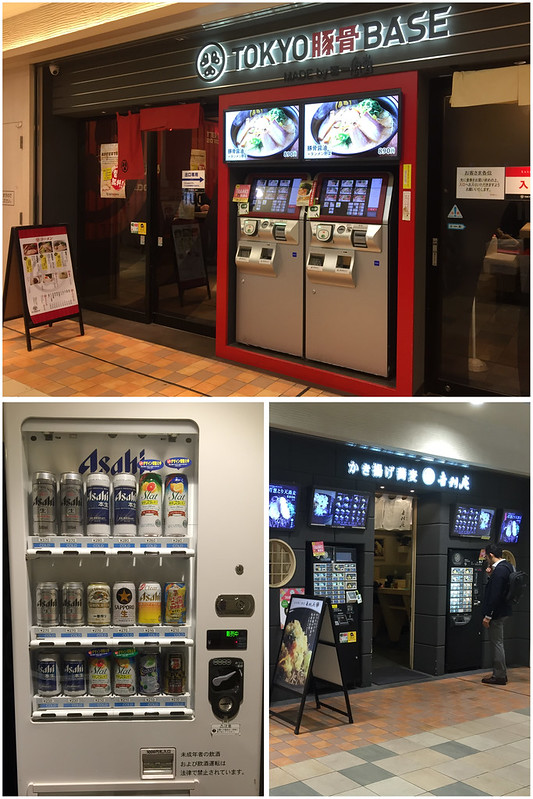 And of course, I was on a mission to ‘collect’ seasonal cherry blossom, or sakura, flavoured food. 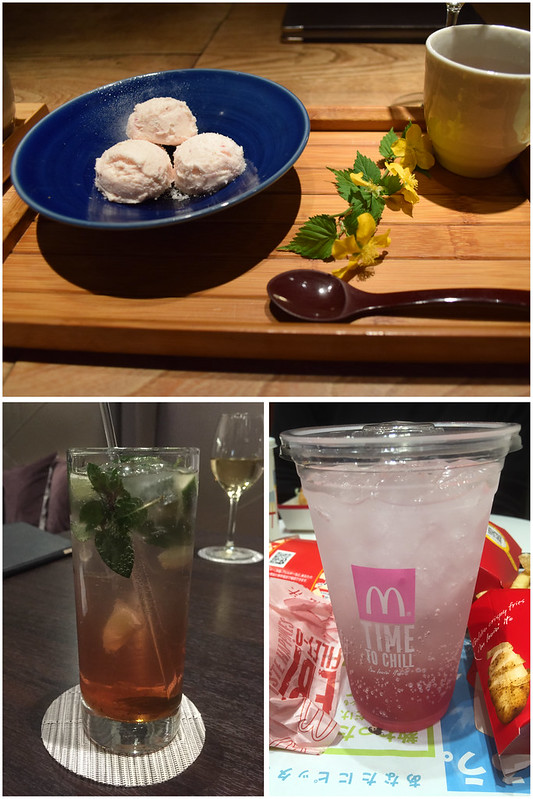 Back in Aberdeen, we got to eat one of our souvenirs, a beautifully packaged set of little cakes from Nikko – featuring a gate from the Toshogu shrine, and the ‘triple hollyhock’ crest of the Tokugawa family. These had two different fillings, red bean, and lotus seed or something that tastes a lot like it. 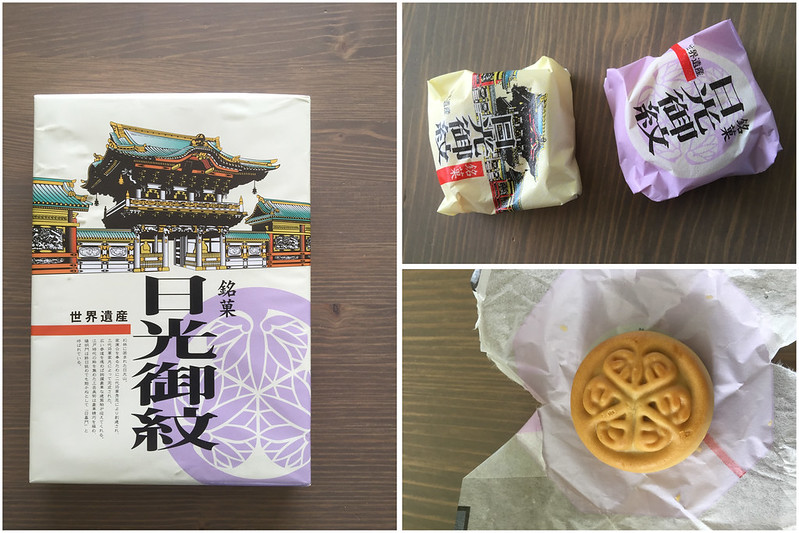 Next up we move on to Hakone, and in the meantime there are more photos from Tokyo and Nikko in my Flickr set.