From Hakone we got the train to Kyoto, and were reunited with our luggage. We’d taken a small bag for our two nights in Hakone, and sent our luggage ahead from Tokyo by takkyubin. This is a brilliant courier service for luggage, and for travellers most hotels help with the process, arranging for the service to collect your luggage and transport it to your next destination, so that you don’t have to be lugging around big suitcases while travelling on subways and trains.

We had a cultural session arranged for that afternoon, at a centre called WAK Japan, based in a traditional wooden machiya (townhouse). To begin with, we were dressed up in kimono, which I really enjoyed. It reminded me a lot of wearing a sari – very fiddly to put on, but once it’s on feels beautiful and elegant. 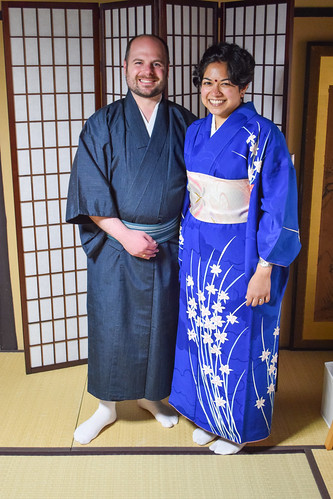 We then went down to the room set up as a traditional tearoom, and experienced the tea ceremony. Our guide was a lovely lady, Yukiko-san, who very patiently explained all about chado – the way of tea. This practice uses matcha, powdered green tea, which is whisked with water to make a thick, strong, tea. Matcha is also used for flavouring food and sweets. As part of the ceremony we also learnt a little about bowing, where there is formal, semi-formal, and casual bowing, for different occasions and relationships. 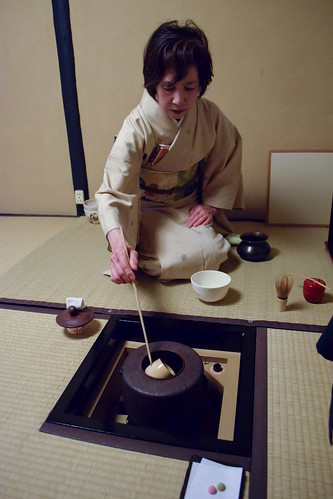 It is such an elaborate and precise process, and there are certain phrases that you say as the host offering the tea, and as each guest accepting the tea. There was another couple with us during the cultural session, so there was more interaction and phrases to be said between guests as well. As Yukiko-san explained, the drinking of matcha tea and the ceremony originated with Zen Buddhism, and the whole experience really is very meditative in the conscious and careful execution of each process, and in the appreciation of fine details, and to me felt very refined and peaceful. 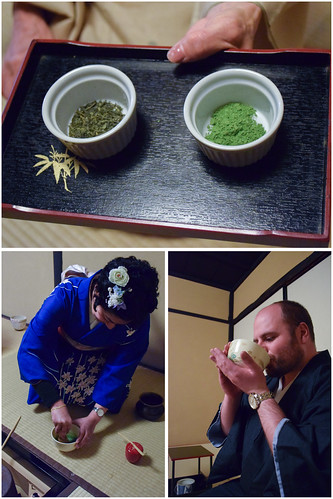 And finally we were taken a short walk away to a former traditional sake brewery, where we briefly learnt about the brewing process, and then got to try some sake – we’ve developed a taste for it now! 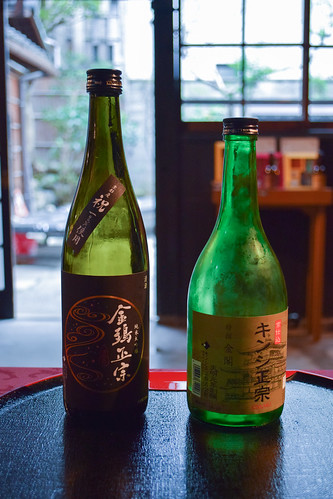 Kyoto is Japan’s capital of culture, and there is even a building height restriction to preserve its historic setting – the mountains surrounding Kyoto are always visible in the distance. The city is laid out in a grid system, and there is a lovely intermingling of wooden buildings, historic temples and shrines, and modern architecture. Although it is a busy city, there is a far more relaxed feel compared to Tokyo. 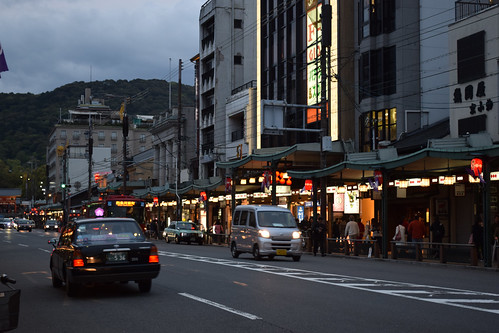 After the cultural session we continued to explore, finding the Teramachi shopping street. This very long street is partly covered, with a mix of traditional and modern shops, as well as temples along and just off it. 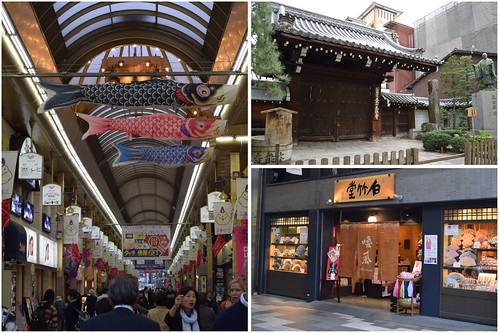 We also saw many symbols and statues of this little mythical creature, Tanuki. It is a Japanese racoon-dog (real animal, related to the wider dog family), and in Japanese folklore is a playful trickster, good luck symbol, and affectionately known as the ‘deity’ of drinking and bars – he’s usually portrayed with a sake flask. In Kyoto he’s particularly beloved, as a bad fire in the ’70s broke out in the Pontocho district, causing much destruction and one death, but before getting any further down the narrow street it mysteriously stopped, leaving only a shattered ceramic Tanuki statue. It is said that he sacrificed himself to stop the fire, and a little shrine to him was built at that spot. 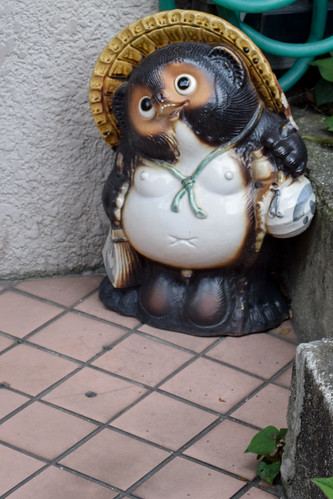 We eventually made our way to Gion, the popular geisha district. In Kyoto the local term geiko is used. We had a wander through Hanamachi-dori, a street lined with ochaya, exclusive teahouses where geiko entertain clients. They look unassuming, but you know fine well you can’t just go in. The older and more exclusive ones require not just a lot of money but an introduction from an existing regular client. 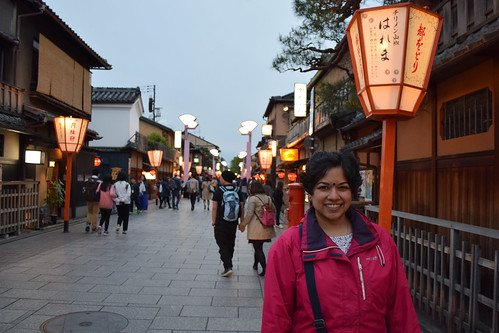 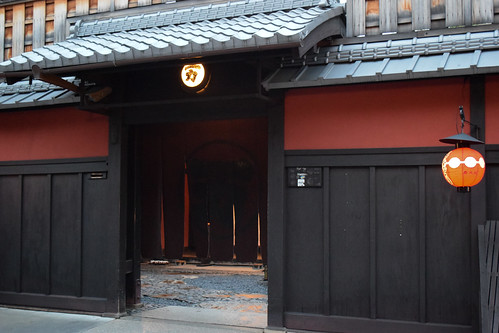 I wasn’t sure how I felt about geiko at first. In the past they were recruited at a very young age, but modern legislation means that children must be schooled up to age 15, and only after this or later do girls join geiko houses to train as maiko (apprentice geiko), which takes around five years, before becoming independent geiko. They are highly trained in the classical arts, and there are strictly no sexual services in their line of work, but they are still entertainers and performers primarily for men. But from doing some reading, and speaking to our guides in Kyoto, it seems that increasingly women also are able to visit ochaya and experience geiko entertainment.

The geiko industry, although still a secretive world even to our Japanese guides, seems to be run almost solely by women, from the geiko schools and boarding houses, to the ochaya, and to the vast supply chain involved in training, costumes, hair and makeup, and public performances. The Western view of geiko is broadly perceived in Japan as exoticised, especially by the book Memoirs of a Geisha, which received much criticism for misrepresentation. The geiko who was revealed as the main source, Mineko Iwasaki, opposed the negative portrayal of her life and later published her own autobiography, Geisha of Gion. So as an outsider, but having learnt a little more, I’m happy to defer to the local view of geiko – a cultural icon, exponents and preservers of the classical arts, and a group of financially independent women.

On the following day, we got to see the Miyako Odori, a performance in the Gion Kobu Kaburenjo, the Gion geiko theatre. 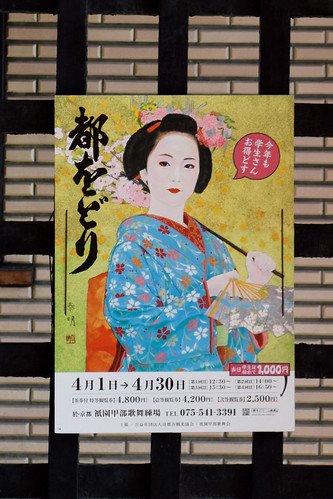 All five geiko districts in Kyoto put on an annual show, and this one is held throughout the month of April. All the dancers and musicians are maiko and geiko. Our tour guide managed to arrange for tickets to the main show that day, and we also got the English audio guide, which made such a difference. The sets, costumes, dances, and music were beautiful, but having the meaning behind the scenes and steps explained enabled us to truly appreciate the performance. This has been going for over a hundred years and is a highlight even for locals, so we were very glad to have been able to experience it.

There were no photos allowed in the theatre, but there is an official clip on Youtube.