Kyoto has about 2000 shrines and temples, many of them hundreds of years old. On our second day here we had a full day tour visiting some of them, but we first started with a castle – Nijo Castle.

This was built by the first shogun, Tokugawa Ieyasu, whose mausoleum we visited in Nikko. 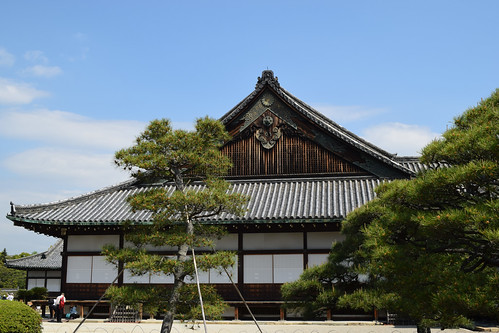 The entrance gate displays a tiger, Tokugawa Ieyasu’s zodiac, as well as a dragon, his son’s zodiac. Later on when the Emperor reclaimed authority from the shogunate, the triple hollyhock crests of the Tokugawa clan were removed and replaced with the imperial chrysanthemum crest. 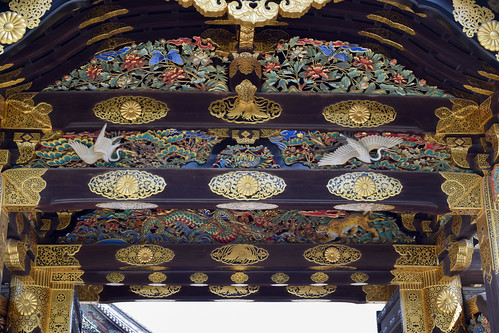 This castle is famous for its ‘nightingale floor’ in the inner section, which was intentionally constructed with floorboards that squeak, meaning an attacker couldn’t ever sneak in unheard. Inside there were many beautifully decorated screens, and plenty of gleaming gold leaf. Our guide, Akie-san, explained that many of the feudal lords were ‘frenemies’, and were allowed only into the outer rooms – accordingly, the decorations in these rooms used imagery of fierce animals and mighty trees. Family and trusted friends were seen in the inner rooms, which were decorated with more pastoral images of flowers and little birds.

It has a beautifully landscaped moat, and lovely gardens full of cherry blossoms. 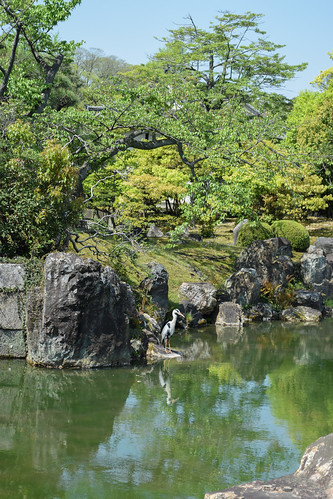 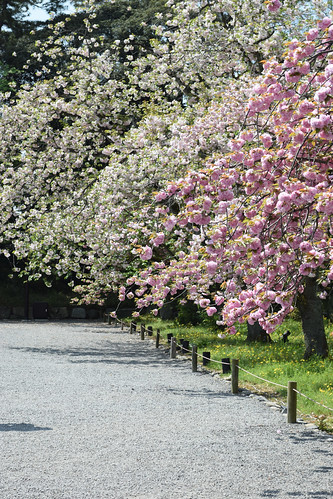 We then headed over to Kinkakuji – the Golden Pavillion, which is a beautiful Zen Buddhist temple. The temple has three different styles of design for each level, covered in gold leaf on the highest levels, and topped with a golden phoenix. 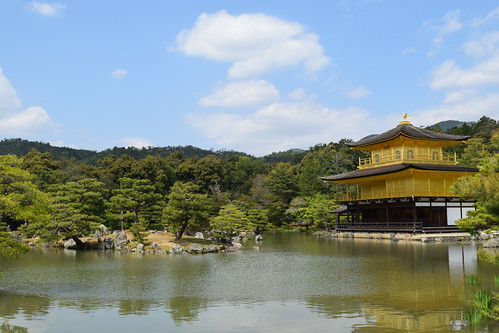 Next we visited Ryoan-ji, another Zen Buddhist temple, with a splendid rock garden. The white gravel is raked into the same pattern every day by the monks. 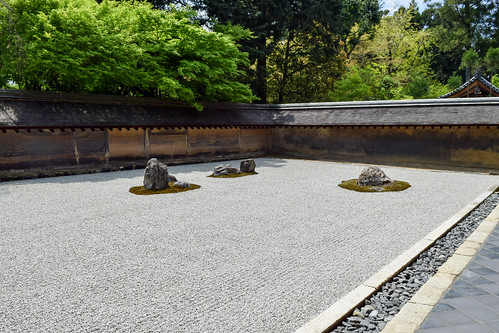 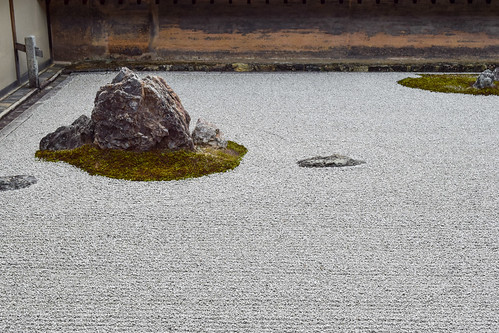 There are 15 rocks in this rock garden, but they are laid out such that all 15 can never be seen at the same time from any point (except directly above). No one knows the original meaning of the pattern, but Akie-san considered it a metaphor for the Zen approach to life, in that you can never have everything, and must be content with what you can realistically achieve. We sat on the verandah for some time, gazing upon the rocks and contemplating this.

After a hearty ramen lunch, we headed on to Kiyomizu-dera, also a Buddhist temple. It’s located up in the hills, and was built in the 1600s with no nails at all, just interlocking joints. 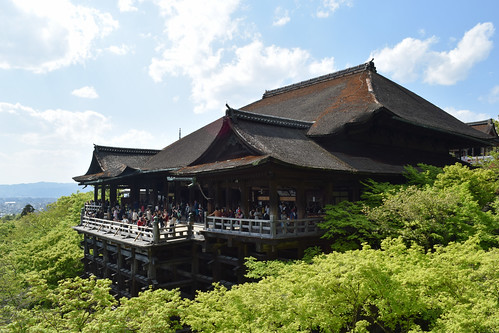 This natural spring is said to grant wishes if you drink from it, and is what gives the temple its name – kiyo mizu means pure water. 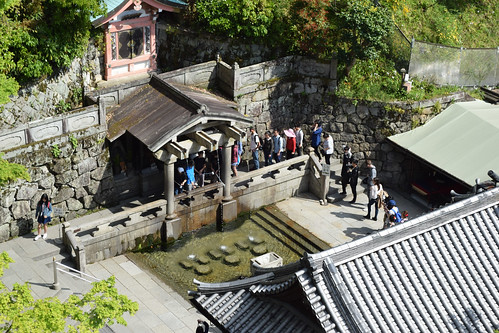 There are also several other shrines and buildings in the temple complex, and further below is the Higashiyama district, full of little shops in the preserved wooden buildings. We made our way down the street, stopping at many shops and acquiring more souvenirs and gifts. 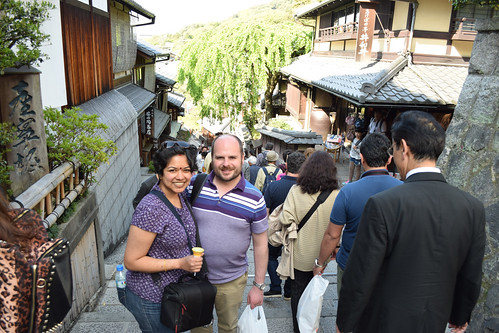 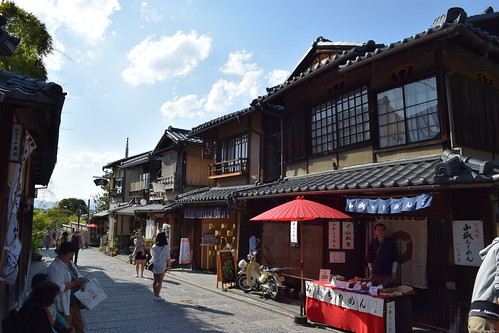 Akie-san led us on through the streets of Kyoto, and along the way we saw two more interesting little shrines. One was a shrine for cutting off bad things – illnesses, bad business dealings, bad relationships, whatever it may be. Part of the worship at this shrine is crawling through a hole in a monument, ‘leaving’ your unwanted thing behind. It seemed to be very popular, going by the thousands of papers with prayers and supplications attached to the monument. 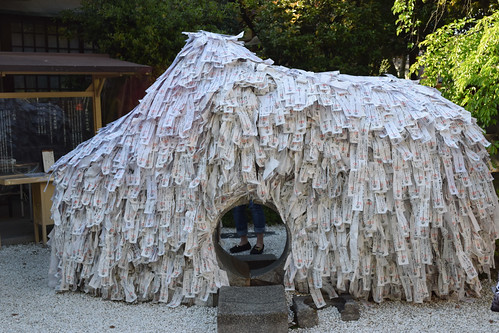 The other was a shrine to a monkey deity (where, of course, we got an omamori). There were interesting little offering ‘garlands’ with little fabric ornaments which look like monkeys attached. Often families will leave an offering with the right number of monkey ornaments to represent each family member. 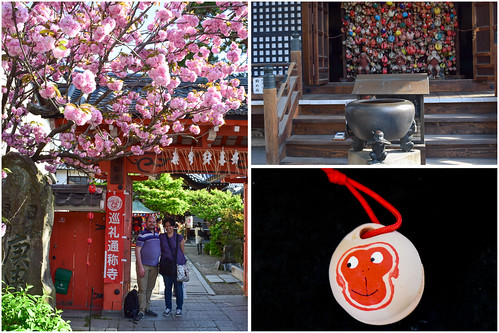 In the following days we also visited some other places of worship. One of these was the Higashi-Honganji temple, just minutes from our hotel. This Buddhist temple had a huge, beautiful entrance gateway, and a large main hall. It was also very different from the other temples we’d been to, in that it was not ‘touristy’ at all. From the information displays they also seem quite politically conscious, in conveying their strong pacifist beliefs and desire for people to question government actions that support or may lead to war. 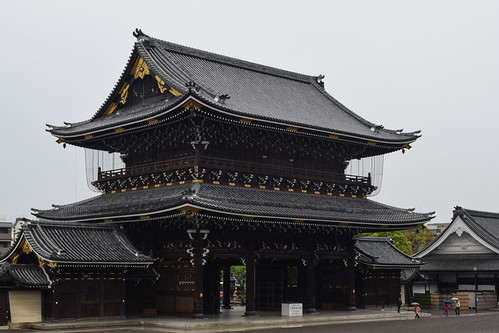 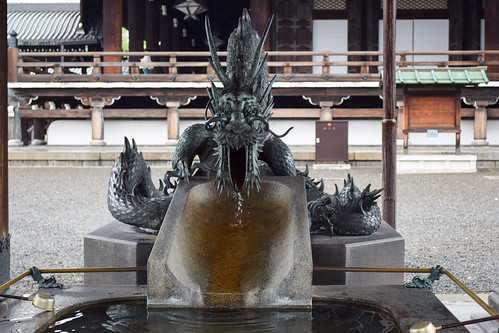 There was a prayer session going on in the main hall, but the attendants there waved us in, so we sat at the back for some time, listening to the chanting. It was really very serene and peaceful, and we very glad to have been welcomed to experience it.

Another very different shrine we visited was the Fushimi Inari shrine, dedicated to the god of rice. Inari’s messenger is a fox, so there are many depictions of foxes here. 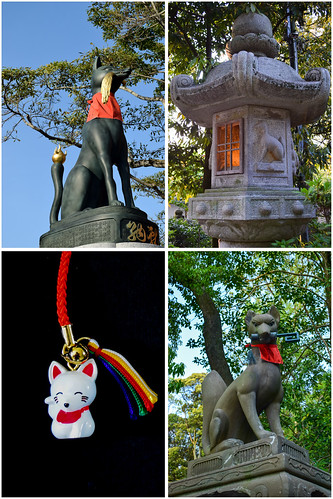 This shrine is over 1300 years old, set at the base of Mount Inari, and has thousands of little sub-shrines in the path that goes up the mountain. What makes it really special is that the path is lined with thousands of stone and wooden torii gates (estimates range from 5000 to 10,000 gates). These have all been donated over the years, mainly by businesses – Inari, being the deity of a precious crop, has become the patron deity of business and industry. Whatever the number is, there are very many torii gates, each inscribed with the names of the donors, and it’s so very impressive seeing this line of orange gates winding up the trail. We were there in the early evening, as the sun was starting to set, which made it even more atmospheric. 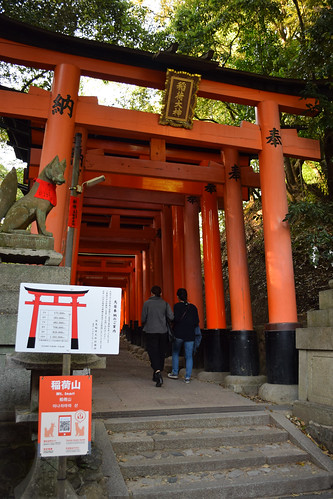 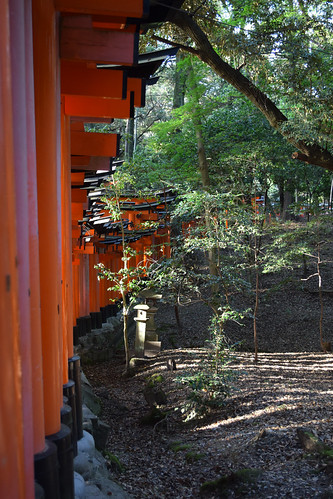 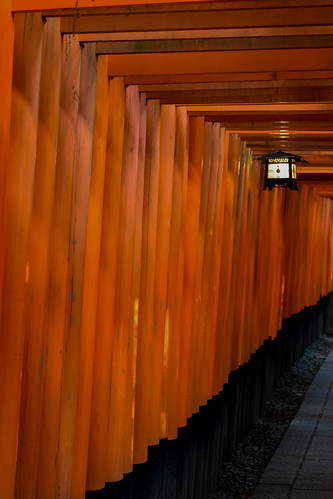 The temples and shrines of Kyoto truly are captivating.

2 thoughts on “Temples and shrines of Kyoto”