For all my discomfort with uneven ground at height, I decided it would be a great idea to climb up a steep Norwegian cliff! 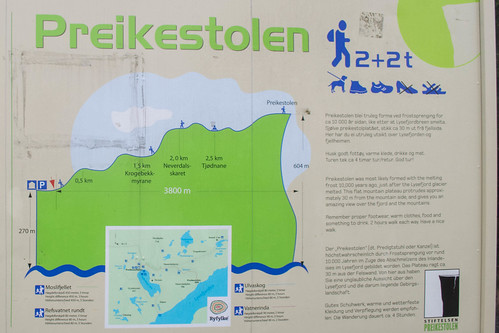 I was at a conference in Stavanger last month, and having been there a few times and heard of Pulpit Rock (or Preikestolen), and seen it from below on a boat, I decided it was finally time for me to give it a go. It’s a popular tourist attraction, and there’s a lot of information out there about it, including the Preikestolen Mountain Lodge and Visit Norway websites.

Unfortunately on the one day that I could go it was rainy or misty at best, but hey ho. I got the ferry from Stavanger to Tau, and then a bus (cleverly timed to coincide with the ferry schedule) to Preikestolen Mountain Lodge, which is the ‘base camp’ and starting point of the hike. Pulpit Rock is 600 m above sea level, but the 3.8 km hike starts at a height of 270 m.

The journey from Stavanger to the Mountain Lodge takes about 1.5 hours in total. There are a couple of bus companies that put on buses from Tau, and you can buy a return bus ticket beforehand at the ferry terminal in Stavanger. Since I got the Boreal airport bus (Flybussen) into town when I arrived the day before, that ticket got me a 10% discount on the Tau – Preikestolen bus with the same company. 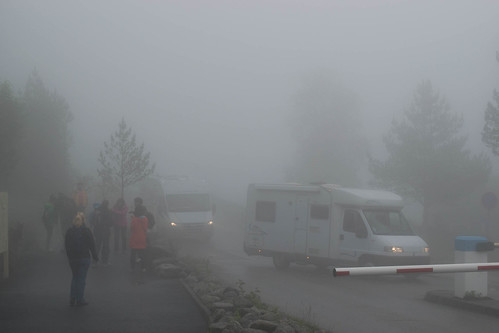 A foggy start at base camp

When the weather is not suitable for hiking there are signs and warnings against going up, but summer rain and mist weren’t stopping anyone. Armed with my walking poles I headed off. 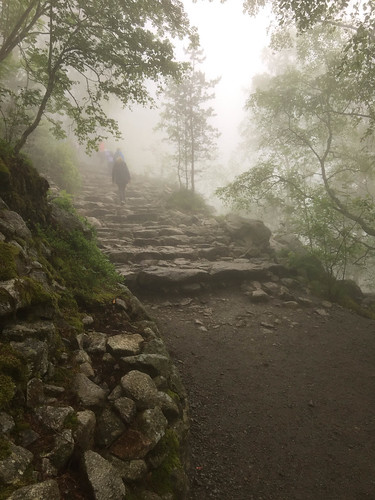 Pulpit Rock has a mix of steep rises and falls, and lovely flat bits in between. There’s also quite a bit of tree cover most of the way, which I liked. There are also sections which have been improved over the last few years, and rock steps built with the support of Nepalese sherpas. 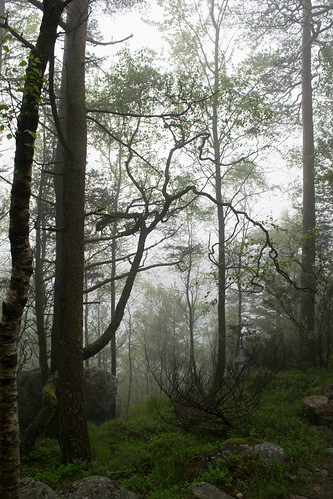 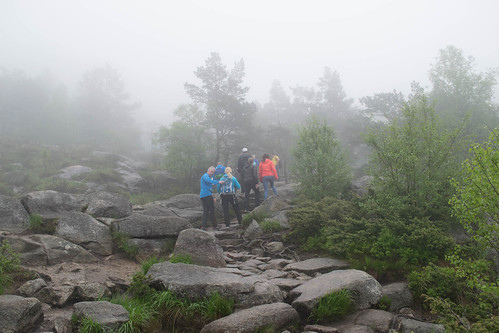 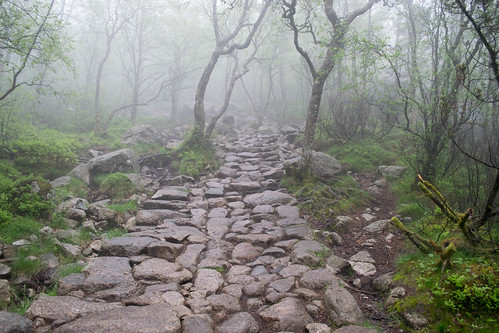 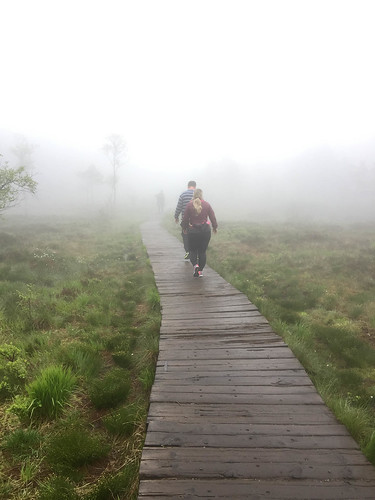 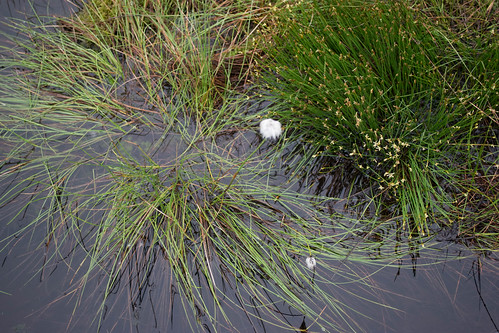 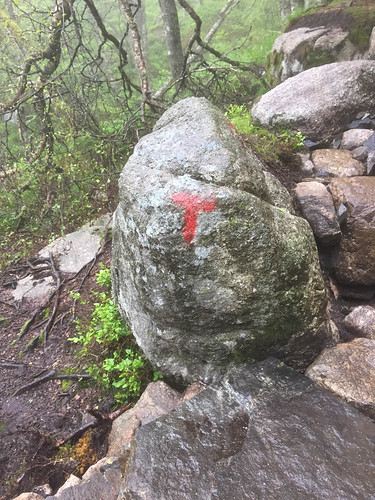 Helpful trail markers dotted all along the way

The path is largely rock steps, some only little steps and some quite large. As it gets higher some sections are also ‘smoother’ and steep, which I think were a little more daunting than usual because it was wet. 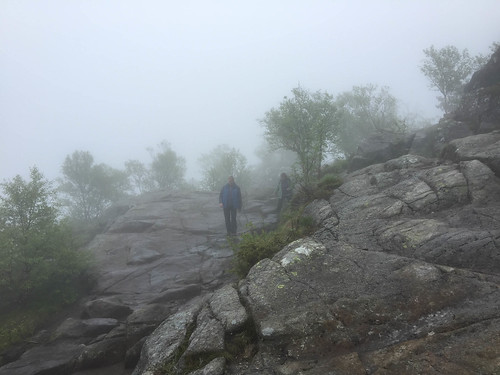 There are also one or two very steep sections, with narrow ledges to pick your way down or up, depending on which way you’re heading. Not terribly high, but if you’re going down it’s still too high to jump. Most people managed just fine, but some, like me, found it difficult. This was the only downside of walking poles, when you need your hands! But there were many kind strangers, and I had some help in places like this, and people waited patiently for slower ones to take our time. 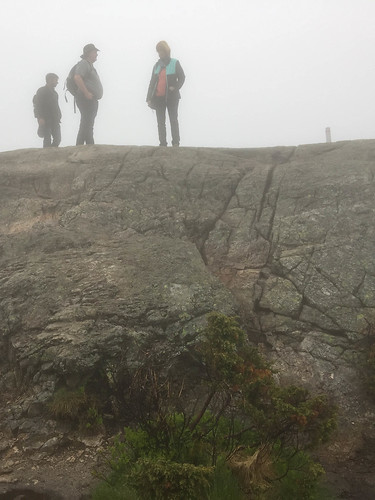 Halfway up there is a lake, which people do swim in when it is hot, but definitely not today. You could hardly see it! I really liked this bit; it was very atmospheric. 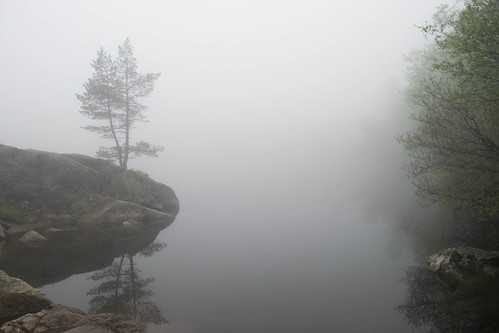 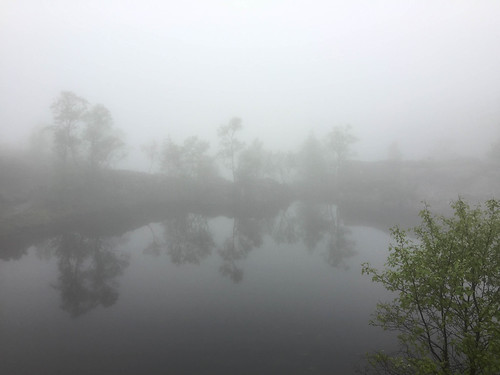 Finally, I got to the top, and by this time the mist had become rain 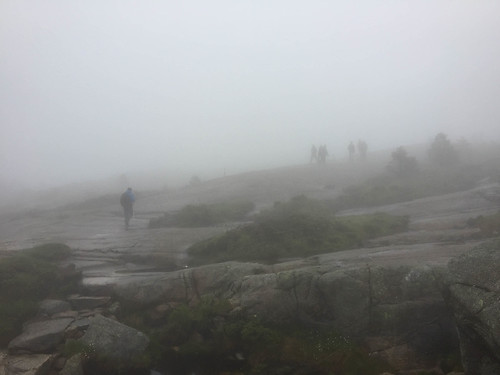 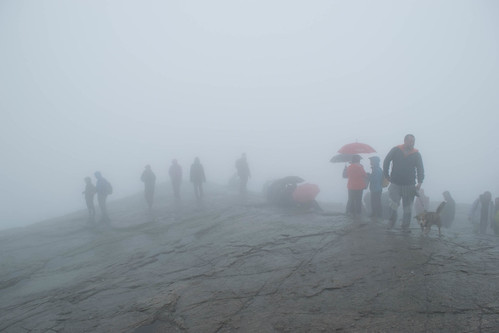 Facing a corner, with the famous edge on the left

Although the weather meant you couldn’t see over the edge to the fjord all the way below, I thought the mist gave it a really unique feel that you don’t normally see in the brochures. Atmospheric, enigmatic, wild, mysterious, mystical (Thesaurus.com doesn’t disappoint!).

Makes for a cool photo, but I couldn’t ever do this! 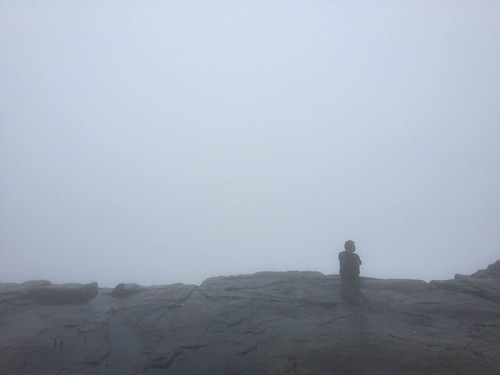 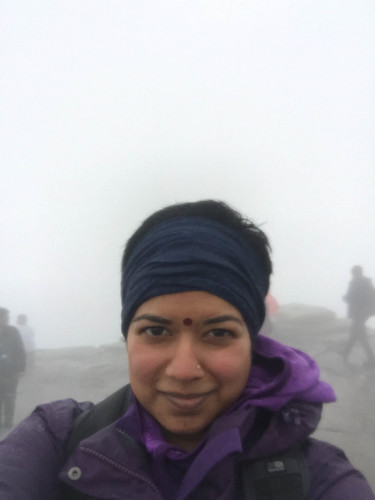 After sitting at the top for a bit and having my packed lunch, I then headed down again. This was harder! However the rain and mist had started to clear up, and I could see more of the surroundings that were hidden on the way up. 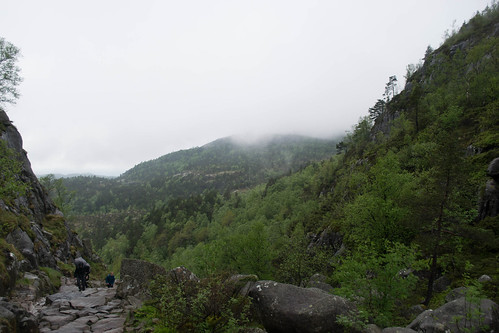 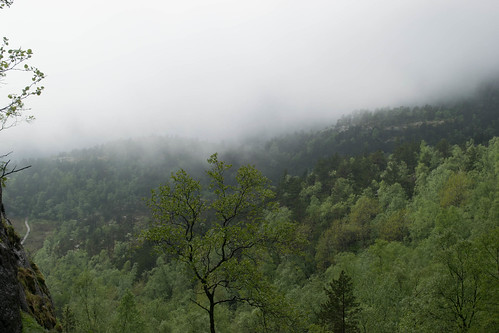 So many shades of green 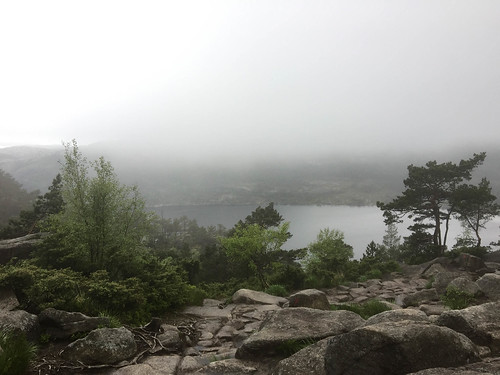 And finally I got back to the starting point, and jumped on a bus back to Tau, back on the ferry to Stavanger, and back to my hotel for a nice hot shower!

What a mad but exhilarating experience! It took me 3.5 hours to go up, and about 3 hours coming down (which is about an hour longer than average each way), but I had been going really quite slowly, stopping often to catch my breath, as well as stopping to take lots of photos, especially on the way up. I’m not a regular hiker, and I found some parts pretty scary, but other amazing parts made up for it. I’d told myself that I could stop and turn back at any point, but I’m really pleased I managed to push on and get to the top in the end!